History of The Armory 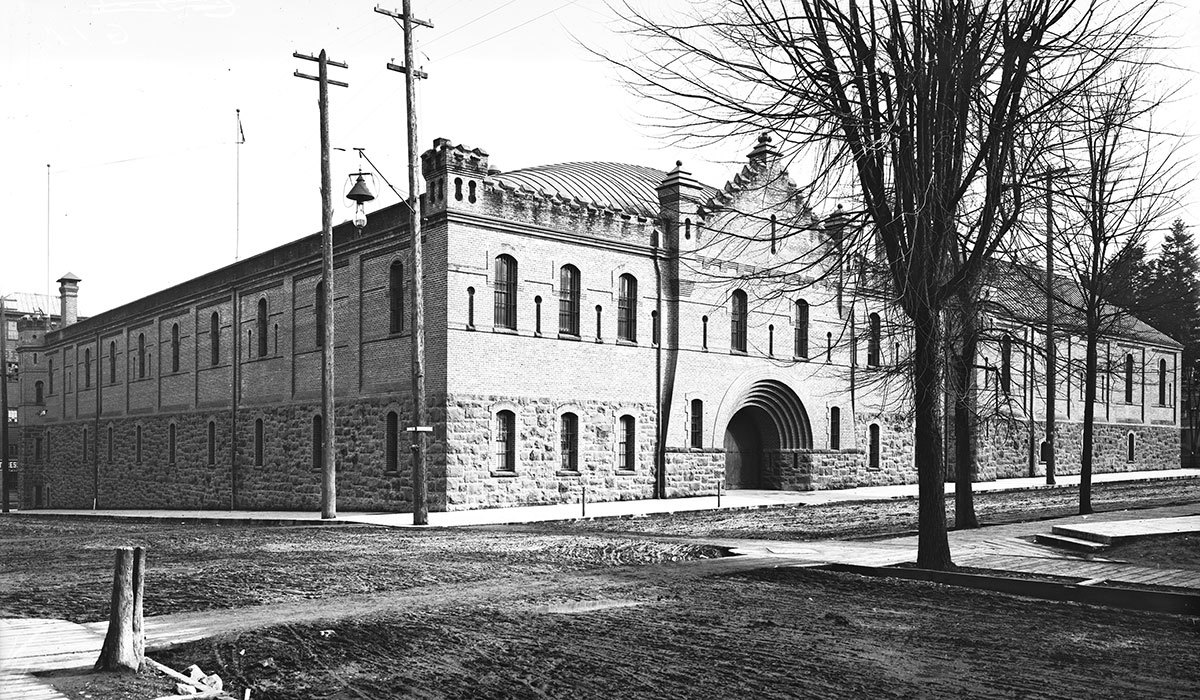 The Armory was built in Portland in 1891 as the National Guard Armory Annex. In 2006, after a major renovation, the building opened its doors to the public as the new home of Portland Center Stage. Read on to learn more about The Armory's fascinating history and its celebrated rebirth as a performing arts facility.

History of The Armory

Constructed during the spring and summer of 1891, and formally dedicated in September of that year, the Annex initially provided local units of the Oregon National Guard — quartered in the three-year-old main Armory located on the south half of the same block — with more space for drill maneuvers, as well as an underground firing range for all-season target practice. The fortress-like Annex — with its thick walls, reinforced wooden doors, loopholes, turrets, and crenellated parapets — played another, no less significant role in the city. Given the era’s ongoing worries about mob violence and fears of class warfare, and given the numerous anti-Chinese riots that had recently taken place up and down the Pacific coast, most Portland residents would have welcomed the building as both a symbol of power, strength, and security, and as a constant reminder of military authority during unsettled times.

Although the Annex was designed to meet the needs of the National Guard, by the mid-1890s, it had definitely taken on the character of a public hall. One of the main reasons for this was the fact that the building could handle extremely large crowds. The roof’s innovative truss system meant that there are no pillars to get in the way, and so more people could move freely inside the space. Additionally, whenever an event was scheduled, as many as 5,000 could be seated on temporary wooden bleachers on the main floor, while another 700 to 1,000 could easily fit in a second floor gallery.

What sorts of events would have taken place in the Annex? Prior to World War I, the offerings there were many and varied. In 1897, for example, audiences watched a display of “living pictures and animated scenes by the latest and greatest of all the so-called ‘moving picture’ machines–the wonderful electrograph.” The Oregon Pioneer Association staged two of its annual reunions in the building in 1898 and 1899, and in March 1900, it was the site of a moving tribute to the state’s war dead. During the first fifteen years of the new century, various local and national organizations, including the Portland Rose Society, the Multnomah Amateur Athletic Club, the Shriners, and the Elks, used the Annex as a meeting and convention space, and a number of very well-attended trade shows and exhibitions were held there as well. At the same time, local music lovers could hear vocal recitals by, among others, Mary Garden (who, in 1902 created the title female role in Claude Debussy’s opera Pelléas et Mélisande, and who may, or may not, have been the composer’s mistress), Dame Nellie Melba (in a program that, according to the newspaper’s account, transformed the “grim old Armory…into a veritable place of enchantment”), and the young Irish tenor John McCormack, and concerts by the Chicago and New York Symphony Orchestras. John Philip Sousa, a regular visitor to Portland, showcased his famous ensemble in a series of three Annex programs. The Oregonian’s review of the first of these reported that “3,000 people applauded when [Sousa] raised his baton at the Armory…and led his players into a revel of melody which continued for two hours and a half…The concluding number was the magnificent ‘Ride of the Valkyries’ from ‘Die Walkuere,’…and it rounded out most beautifully what was one of, if not in fact the very finest, evenings Portland has ever spent with a band of music.”

In 1911, the Annex welcomed “Colonel” Theodore Roosevelt, governor Woodrow Wilson of New Jersey (yet to start his campaign for the 1912 presidential election), and the current occupant of the Oval Office, William Howard Taft (who had previously spoken at the Annex in 1909, only seven months after being sworn in). Writing about Roosevelt’s visit, the Portland Spectator noted that, “The size of the crowd at the Armory must have pleased [him]; it was patient and enthusiastic. On the platform with him were a number of prominent citizens, who were as generous in their applause as was the man in the farthest corner of the building to whom the speaker’s words were hardly audible. The Colonel is popular—of that there is no doubt; probably all the people who go to hear him would not vote for him. If he does not know that he will run for the presidency again…Portland may feel satisfied that she did all that was possible to make Colonel Roosevelt’s stay pleasant….”

By 1918, Portland’s 4,500-seat Municipal Auditorium, dedicated the year before, had established itself as the preferred location for most of the city’s major cultural events, mainly because audiences could now experience concerts, recitals, and lectures in style and comfort, rather than in a large rectangular drill hall with hard wooden bleachers and cavernous acoustics. Clearly, the days of opera singers and symphony orchestras at the Annex were over. Amateur boxing, which had been introduced there in 1919, turned into the primary form of entertainment during the 1920s, and it continued to attract large and enthusiastic crowds up until the late 1930s.

In 1928, following a Fire Marshal’s report determining that the Armory and the Annex were unsafe, the county and the National Guard needed to decide whether to spend money to fix the problems, or to sell the property and its contents and put the proceeds toward the construction of a brand new facility. From this point on, one gets the sense that everyone involved simply lost interest in these structures, that the financial burden required to maintain two potentially hazardous buildings became too great. Over the next four decades, there would be repeated calls to replace the Armory, but none of these ever panned out. When Blitz-Weinhard purchased the Armory block in 1968, the Annex was a faded, worn, and neglected relic, one whose past glory seemed to be almost entirely forgotten. 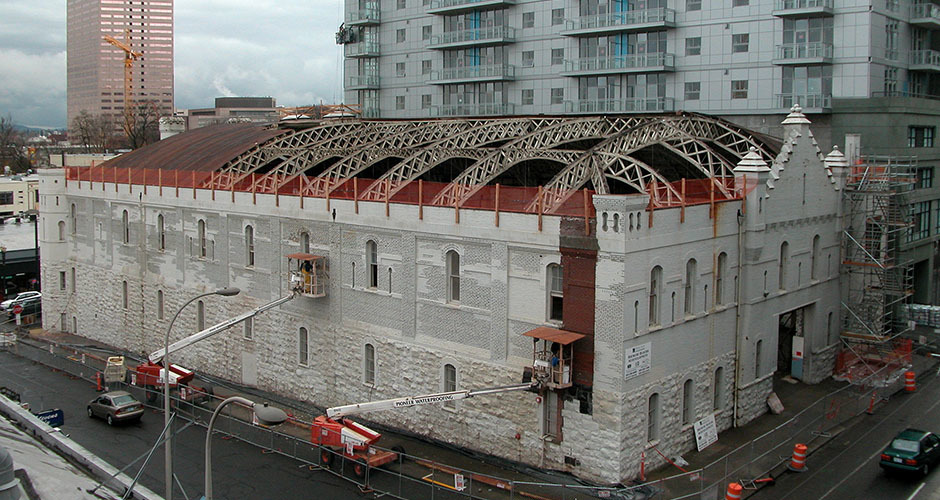 Widely noted as the “crown jewel” of the Brewery Blocks redevelopment, The Armory’s renovation has contributed to the revitalization of the Pearl/River District, providing both a near-term economic benefit of $14.7 million to the community and a projected long-term impact of $100 million in new economic activity over the next decade.

The vision began in 2002 when the Portland Armory Annex was the last piece in the Brewery Blocks development puzzle that Gerding Edlen Development was looking for a solution to. Many things were considered, but when Mayor Vera Katz and Artistic Director, Chris Coleman agreed that it would make a fantastic home for Portland Center Stage, Bob Gerding stood behind the concept and personally drove the effort to make it a reality.

After a $36.1 million dollar renovation, the building was reborn as the Gerding Theater at the Armory on October 1, 2006, with a community celebration and block party attended by a throng of thousands. Shortly after opening, the building was certified by the US Green Building Council as exceeding the requirements for designation as LEED Platinum.

During its first year as the home of Portland Center Stage, The Armory was mentioned in the Wall Street Journal, nominated for the Portland downtown Rotary Club’s Environmental Excellence award and the Portland BEST award for green building. It was also recognized by Forbes magazine as among the top 12 green buildings in the country. Alongside the William J. Clinton Presidential Center, The Armory received honorable mention from the American Institute of Architects Council on the Environment’s Top Green Projects awards. In April 2007, the Urban Land Institute selected The Armory from among 170 nominees spanning two continents for its Award for Excellence, the Americas.

Since The Armory became the first building in the Cascadia region – and the first historical renovation of a performing arts venue in the world – to achieve a Platinum LEED certification, it has drawn groups of people interested in sustainable design from across the country, as well as international delegations from Russia, Belgium and Hungary.

“It is a quintessential Portland project — ambition and idealism packaged in something old — a champagne version of what might be called the 'Bottle Bill Era' of Portland architecture.” — Randy Gragg, The Oregonian

“Inserted within the shell of a national landmark Armory saved from the wrecking ball, PCS’s 'ship in a bottle' facility serves as a distinctive vessel for the arts that is quintessentially Portland. In the end, the Gerding Theater at the Armory is a shining example of an American regional theatre finding relevance in the life of its particular community.” — Keith Gerchak, American Theatre

We at The Armory humbly acknowledge that the Portland metropolitan area rests on the traditional village sites of the Multnomah, Wasco, Cowlitz, Kathlamet, Clackamas, Bands of Chinook, Tualatin Kalapuya, Molalla and many other Tribes who made their homes along the Columbia (Wimahl) and Willamette (Whilamut) rivers. Today, Portland’s diverse and vibrant Native communities are 70,000 strong, descended from more than 380 tribes, both local and distant. We take this opportunity to offer respectful recognition to the Native communities in our region today, and to those who have stewarded this land throughout the generations.