Tickets for groups of 10 or more people are now on sale. Details on group tickets HERE.
Individual tickets will go on sale late August. 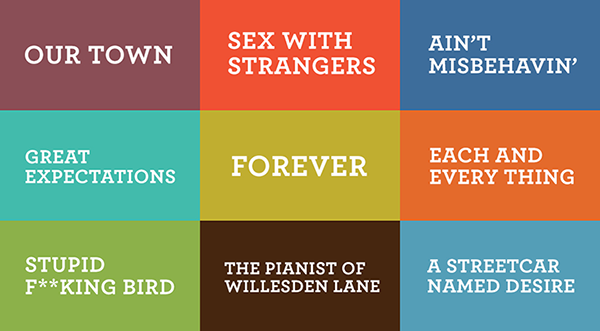 ON THE U.S. BANK MAIN STAGE

An irrefutable classic of the American theater, this Pulitzer Prize-winning work transports us to Grover's Corners, a small New England town at the turn of the twentieth century whose secret desires, family conflicts, loves and losses are resoundingly familiar to us today. This beloved drama receives a fresh interpretation at PCS, inviting us to ponder what Our Town is today, and celebrating both the marvel of everyday existence and the “something way down deep that’s eternal about every human being.”

Winner of the Tony Award for Best Musical, this sassy, sultry musical celebrates the remarkable life and talents of a legendary jazz great, Fats Waller. The delightful humor and infectious energy of this exuberant jazz revue that takes us from the Harlem Renaissance through World War II; Waller's work shows a determination to grasp life’s joys, laughter and passion, even in a community shadowed by the pain of a complex American society. With permission from the authors, PCS is creating an expanded-cast version of the original production.

Based on Charles Dickens’ classic coming of age novel, Great Expectations tells the adventures of the Victorian orphan Pip. As a boy, Pip has three encounters with people that will change his life: the escaped convict Magwitch, the bewitching and cold Estella, and the unhinged Miss Havisham. When Pip comes into an unforeseen fortune and begins the life of a gentleman, though his past is not so easily left behind, and the surprising adventures of his new life are decidedly unexpected.

In this irreverent, contemporary, and very funny remix of Chekhov’s The Seagull, award-winning playwright Aaron Posner wages a timeless battle between young and old, past and present, in search of the true meaning of it all: an aspiring young director rampages against the art created by his mother’s generation; a nubile young actress wrestles with an aging Hollywood star for the affections of a renowned novelist; and everyone discovers just how disappointing growing up can be. Winner of the Helen Hayes Awards for Outstanding Resident Play and Outstanding New Play or Musical.

THE PIANIST OF WILLESDEN LANE

Set in Vienna in 1938 and in London during the Blitzkrieg, The Pianist of Willesden Lane tells the true and inspirational story of Lisa Jura, a young Jewish musician whose dreams are interrupted by the Nazi regime. In this poignant show, Grammy-nominated pianist Mona Golabek performs some of the world’s most stunning music as she shares her mother’s riveting true story of survival. Pianist is infused with hope and invokes the life-affirming power of music.

Tennessee Williams’ iconic Pulitzer Prize-winning masterpiece is an exquisite study of the unraveling of Blanche DuBois, a fading southern belle. When she arrives unexpectedly on the doorstep of her sister, Stella, and her brother-in-law, Stanley Kowalski, Blanche is clinging desperately to a persona designed to help her survive. Over the course of one hot, sultry New Orleans summer, Blanche’s fragile facade slowly crumbles as she meets her match in the rough-hewn and hyper masculine Stanley, who is determined to expose her. Portland Center Stage’s production will star veteran stage/TV/film actor Russell Hornsby (Hank Griffin on Grimm).

IN THE ELLYN BYE STUDIO

A raging snowstorm traps strangers Olivia, an unsuccessful yet gifted thirty-nine-year-old writer, and Ethan, a tech- addicted and wildly successful young blogger, in a secluded cabin. Opposites instantly attract, and undeniable chemistry ignites. As the dawn rises, however, what could have just been a one-night-stand transforms into something more complicated when online exploits interfere with their real- life connection.

EACH AND EVERY THING

The newest solo show from award-winning actor/ playwright Dan Hoyle (The Real Americans) is about how we experience the world in the digital age. From a showdown with a violent felon in small-town Nebraska, to a childhood listening to anti-conformist rants in San Francisco; from the hard-scrabble corner boys of Chicago to the intellectual temple of Calcutta’s famed coffeehouse; from a Digital Detox retreat in remote Northern California to an intimate confession in Manhattan, we join Dan in his search for true community, spontaneity and wonder in our fractured, hyper-connected world.

Not part of a season package, but season ticket patrons may purchase discounted tickets.

The Second City’s A Christmas Carol:
TWIST YOUR DICKENS

by Peter Gwinn and Bobby Mort

by David Sedaris
adapted for the stage by Joe Mantello