Margaret and Helen Schlegel are savvy, intellectual women struggling to be heard over the stubborn dominance of England's early 20th century social strictures. When their lives intersect with two very different men, the sisters’ relationship to each other, themselves, and the way they see the world, changes forever. Four actors play 20 characters learning how to connect with each other in a landscape of changing values and alliances. Howards End will have its world premiere next spring as part of our 2019-2020 season! 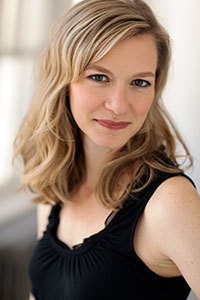 Caroline is an actress, adaptor, and translator. She has appeared on Broadway twice, in Junk and The Front Page, and has worked extensively Off-Broadway and regionally. Recent television work includes recurring roles on The I-Land and When They See Us, as well as roles on New Amsterdam and The Black List. Caroline’s adaptation of Howards End was part of the What’s Next Fest at The Theater at Monmouth in 2018. She has an M.F.A. in acting from American Conservatory Theater, and a B.A. in French from Vassar College. She is currently adapting The House of Mirth into a play for five actors.