'Ain't Misbehavin' was the first Broadway show I saw as a senior in High School. I've never really wanted to do it before because that production was etched into my memory. But I saw Ken Burns' documentary, 'Jazz' a few years ago, and got fascinated by how gritty, complex and steamy the world that Fats Waller's music came out of seemed to be. I started imagining those witty, bawdy, coded songs being staged in much more specific context in the Harlem of the 30's and 40's, so we'll get a clear sense of what's at stake.'

The intense conflict between him [Fats Waller] and his father over his passion for music (Waller was rockin’ out on the organ at the local theater at 15), which his father literally saw as the devil’s music. And the layers of history, oppression, rhythm and possibility colliding in Harlem at that time: it was one of the first places in the U.S. that a large enough population of African Americans had come together who were ‘free,’ and fully aspirational in terms of carving out their own voice, culture, and prosperity.

There were still intense layers of bias and bigotry, but there were huge strains of literary, political, economic and musical revolution happening: and Waller was right in the middle of it all.

Waller’s spirit, his humor, his obsessive, relentless creativity were revolutionizing the musical scene (in one year Waller recorded 100 songs). He was also a mess: he was married twice, and had several children – but also had many, many girlfriends; had recordings funded by major studios as well as gangsters; stayed up too late, drank too much; and was in and out of jail for forgetting to pay his child support.

So I started to wonder how you might create a production of Ain’t Misbehavin’ that would more fully express the world and spirit of Fats Waller, utilizing the set and staging to create context for the stories that get sung through the evening. I reached out to the show’s creator, Richard Maltby, asked if I could have permission to go down this road and slightly expand the ensemble from 5 to 11, and he said, ‘Yes. Do it. It will be YOUR Ain’t Misbehavin’. 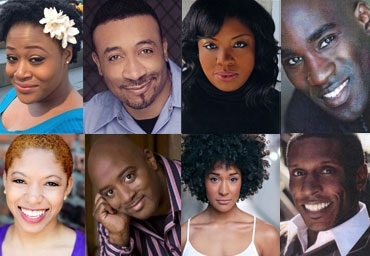