When the Lights Come Up, Anything is Possible 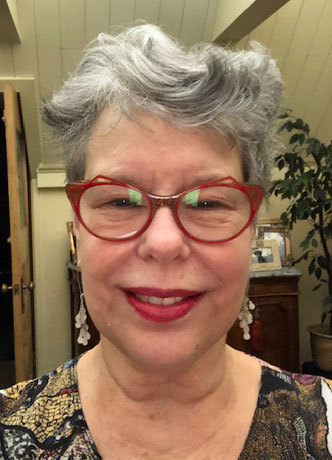 Ellyn Bye became a season subscriber within a year of attending her first Portland Center Stage production. Her relationship with PCS grew over time, and she supported The Armory Project — the massive renovation to convert the historic Armory Annex into the new home for PCS — by naming the Green Room after her parents. A few years later, PCS dedicated the Ellyn Bye Studio in her honor in appreciation of her years of generous support and engagement. Fast forward 18 years and her love for PCS and for being entertained have only deepened. Read on as she chats with Luisa Adrianzen Guyer, PCS’s Director of Development.

Tell us a bit of yourself and how long you’ve been coming to PCS.

EB: I have been coming to PCS for about 18 years. I think the first show I saw was Bat Boy: The Musical with Wade McCollum at the Portland Center for the Performing Arts. The following year, I got season tickets, and Chris Coleman reached out to introduce himself. We met for coffee and when I mentioned my love of historic architecture, Chris filled me in on The Armory Project. That was the beginning of a very nice friendship. I got in on the ground floor of The Armory Project with a financial contribution, and I named the Green Room — in one of the turrets — after my parents.

How did you first come to love the theater?

EB: I remember seeing Our Town in high school and Sonny and Cher when we were little with my parents. Entertainment just sort of got in my blood. I think it’s the magic. When those lights go down, anything is possible when they come back up, and there are not a lot of things in your life that have that magic quality. To me, that is what theater is all about — to know that you're all going to gasp when the lights come up.

What is your favorite PCS show, and why?

EB: I started compiling a list of shows I loved, and it is a very long list! But just briefly, Sarah Treem’s A Feminine Ending was performed in my studio [the Ellyn Bye Studio]. I saw it during JAW, and I got to meet her. I then sat with her at an Opening Night Dinner, and I have followed her brilliant career ever since. The Feminine Ending show poster still hangs in my house today! The Lion with Benjamin Scheuer — he sat on the stage and opened up about his life, his father's death, and his own battle with cancer. We all knew Benjamin at the end of it. It's those moments that make you feel like, “I know this actor so well,” because of the vulnerability he's shown on stage. It was powerful. The Iliad was also a powerful show. Oh my gosh, a single actor in the studio standing outside in front of The Armory before the show. When I saw him, I thought he was a homeless man, and I worried about him being cold in the dark night. Then he walked into the theater, and he was the actor in the play. The scarf he was wearing became his sword, and his trenchcoat his armor. It was brilliant. Just wonderful!

What is one of your favorite moments at PCS that isn't related to a show?

EB: I love the different ways of interacting with the board, staff, and artists. One year, I bought one of the Onstage Dinners at the Gala, which was so much fun. You get to meet a lot of people. I always appreciate the kindness, the dedication, and the talent of the whole company. The people just really blow me away! When I was on the board, I really enjoyed the Board and Cast Dinners. It was such a great way to connect. I hosted one at my house, and it was enjoyable.

What are you binging on at the moment?

EB: A book I love and have re-read several times from the 70s is called And Ladies of the Club by Helen Hooven Santmyer. It's about 1,300 pages, and it's about these young women who graduate from high school together in the 1900s. It's about the minutiae of their daily lives, and every time I read the book, I don't want to finish the last chapter. Of course, I do, but I always have to put the book down for a while because I don't want these women out of my life.

What do you look forward to the most about theaters reopening?

EB: The moment of magic. I am just ready for that again! To be in an audience with people. Last summer, I went to a Freddie Mercury show by Courtney Freed and David Saffert in David’s backyard. They cordoned 6-square-foot boxes on the grass so our group of 25 people could socially distance. Everyone brought their own lawn chair and it was so good to sit outside and listen to live music. It was like coming out of living in a catacomb for air. That was my most magical night last summer. And it reminded me of how good it felt to see theater. So I'm looking forward to those moments of magic.

Beyond theater, what is something that you’re passionate about right now?

EB: This project called the Soul Box Project. Artist Leslie Lee created this simple project that everyone could participate in to increase awareness and hold space for victims of gun violence. I heard about it from Marlene Montooth at PCS, and I met with Leslie in October of 2019 at her studio in Multnomah Village. I folded my first soul box and cried at the realization that the box I had just made represented a person who had died due to gun violence. It's a simple 8.5x8.5  sheet that you fold into a box, and it’s so powerful and moving. I invite everyone reading this profile to visit the website to learn more about this beautiful project.

With her love of historic architecture, vulnerably intimate theater, and supporting impactful projects, this 18-year relationship (and counting!) has helped pave the way for a lifetime of magical memories.

Thank you, Ellyn Bye, for the support to keep the magic in our theater!

If you are interested in taking the next step to give long-lasting support to PCS as an annual fund donor, explore our Individual Giving options online or contact Jack Ridenour-Starnes, Development Manager, at jackr@pcs.org.