Tickets for groups of 10 or more people go on sale July 1. Details on group tickets HERE.
Individual tickets will go on sale in mid-August. 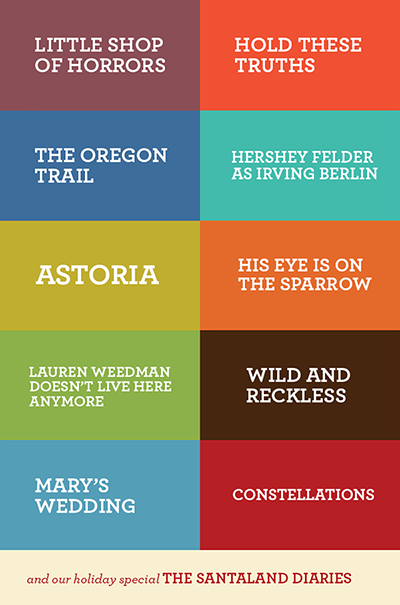 With a score that is part rock ’n’ roll, part doo-wop and part Motown, Little Shop is the story of the shy and love-struck florist’s assistant Seymour, who finds fame, fortune and a whole lot more when he nurtures a strange little plant with a strong — and scary — thirst. Based on the darkly comic Roger Corman film of the same name, Menken and Ashman created a unique musical that swept the Off-Broadway awards when it premiered, and has continued to be a crowd favorite ever since.

As the U.S. joins World War II, Gordon Hirabayashi agonizes over government orders to forcibly remove and mass incarcerate all people of Japanese ancestry on the West Coast. As he fights to reconcile his country’s betrayal with his passionate belief in the U.S. Constitution, Hirabayashi journeys toward a greater understanding of America’s triumphs — and a confrontation with its failures. Inspired by the true story of University of Washington student, Gordon Hirabayashi.

You have died of dysentery! For those who grew up playing “The Oregon Trail” computer game, dysentery was serious business. In this fresh and funny retelling of our history, two Janes traverse The Oregon Trail. “Now Jane” is playing the computer game in 1997; “Then Jane” is in a covered wagon in 1848. A judgey game show narrator, a domineering sister and two oxen try to corral the two Janes. Fate maneuvers them both to a conclusion that changes their lives and sends them to the end of the trail.

Songwriter Jerome Kern said it all: “Irving Berlin … IS American music.” In this tour de force performance by award-winning pianist and performer Hershey Felder, the remarkable story of “America’s Composer” takes us from the depths of anti-Semitism in Czarist Russia to New York’s Lower East Side — and ultimately throughout America and the world. Featuring Irving Berlin’s most popular and enduring songs, Hershey Felder’s masterful creation of character and musical performance makes this evening with Irving Berlin an unforgettable journey that epitomizes the American dream. Hailed as “the greatest songwriter that has ever lived,” by George Gershwin, Irving Berlin is known for innumerable American classics such as “White Christmas,” “God Bless America,” “Anything You Can Do” and “Top Hat, White Tie and Tails.”

A World Premiere!
Adapted from the best-selling true story by Peter Stark, this a harrowing dual journey — one over land, one by sea — will be told with an exceptional cast of sixteen actors. At a time when the edge of American settlement barely reached beyond the Appalachian Mountains, two visionaries — President Thomas Jefferson and millionaire John Jacob Astor — foresaw that one day the Pacific would dominate world trade as much as the Atlantic did in their day. Just two years after the Lewis and Clark expedition concluded in 1806, Jefferson and Astor turned their sights westward once again. Thus began one of history’s dramatic but largely forgotten turning points in the conquest of the North American continent. This monumental piece of American history will be told in two parts over the course of two seasons at Portland Center Stage. Part One is the journey to Astoria and Part Two is about the establishment of Astoria, the first permanent United States settlement on the West Coast.

His Eye is on the Sparrow

From a rough and spirit-breaking childhood to being an unwilling teen bride, Ethel Waters became a Vaudeville success, a recording sensation and crossed racial barriers to emerge as a Broadway and Hollywood star. But a reputation for being difficult and her own distrust of those who might employ her or love her — partly a response to the horrors of Jim Crow America — caused her to lose everything and become a recluse, until she found new strength as a gospel performer. Through it all, there were the songs – the ones that gave her solace and the ones that made her a legend. This is her remarkable story, filled with the greatest hits of a lifetime, including “Stormy Weather” and “Am I Blue?”

A World Premiere!
Portland folk rockers Blitzen Trapper refuse to be pinned down and boxed in. The acclaimed band has mixed genre after genre into their musical arsenal over the fifteen years of playing together. Now they’re unleashing their sound — and knack for lyrical storytelling — on the PCS stage. They’ve mined their Oregonian roots to create a show that asks: What’s the sound of a life falling through the cracks? Fusing the energy of a rock concert with the imaginative possibility of the theater, Blitzen Trapper and PCS join forces in this new project, tracing the unforgettable stories of ordinary Americans caught in an extraordinary struggle to not get left behind.

A World Premiere!
Lauren’s current obsessions: love and heartbreak; big hair and tight jeans; Loretta Lynn and John Prine — or songs she thinks make her look skinny and appropriately tragic. The hilarious and versatile Lauren Weedman (Bust, The People’s Republic of Portland) knows a thing or two about love gone wrong, and she’s ready to sing her heart out about it (Yes! Lauren sings!) and tell you a few tall tales, too. Lauren will be joined by a band of fine musicians; and we’re pretty sure her hair will be bigger than ever.

When Mary and Charlie unexpectedly find one another sheltering in a barn during a thunderstorm, a tentative love is born. But the year is 1914, and Mary and Charlie must surrender their fates to the uncertainties of their tumultuous times during the First World War. In this award-winning Canadian play, their love story unfolds against the most devastating conflagration of war that the world had yet seen, as the playwright weaves time, dreams and memory together to remind us that the heart is beautifully resilient.

Starring Silas Weir Mitchell (Monroe on NBC’s Grimm)
This spellbinding, romantic journey begins with a simple encounter between a man and a woman. But what happens next defies the boundaries of the world we think we know delving into the infinite possibilities of their relationship and raising questions about the difference between choice and destiny. Imagine: What if everything you’ve ever done exists along with everything you’ve never done?