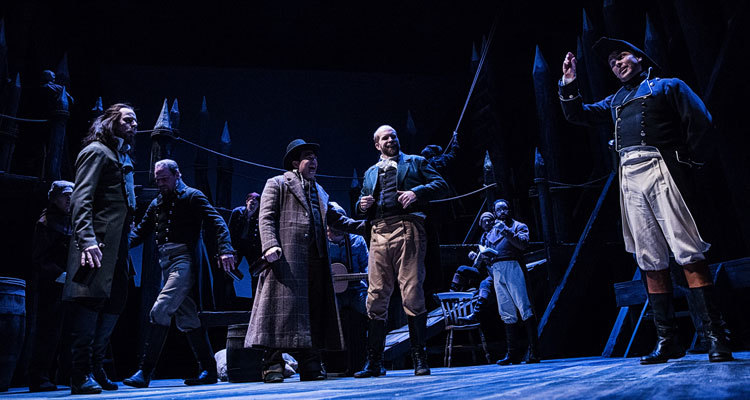 Members of the Tonquin Party in Astoria: Part One. Photo by Jennie Baker.

In 1811, Alexander McKay and his son Thomas arrived at the mouth of the Columbia River aboard the Tonquin ship as members of the Pacific Fur Company. The same year, they helped found Fort Astoria, the first U.S. settlement on the West Coast located in the heart of present-day Astoria, Oregon. 206 years later, in 2017, Alexander’s great-great-great-great-grandson, Bob Nelson, settled into a seat at The Armory to watch Astoria: Part One, unaware that he was about to witness a piece of his own family’s history unfold on stage. Bob reached out to us after the performance and was kind enough to take a moment to share his unique experience watching the show.

Let’s start at your own arrival in Oregon. You moved to Astoria from Wisconsin back in 1993. Did you have any idea then that your great-great-great-great-grandfather had helped found Astoria?
None! I was planning on living in Portland, but after having a hard time finding a job I took one in Astoria, living in seaside. I had no knowledge of what was to come.

How did you first learn that your family had ties to Astoria?
My oldest brother started looking into my mother's side of our family history around 2000. Her maiden name was McCargo. His research led him to an historian at Fort William Historic Park in Ontario, Canada. She knew all about the fur traders of that time and the North West Company [a fur trading business based in Montreal], including my great-great-great-great-grandfather, Alexander McKay.

When you learned about your family’s history in Astoria, did it shape the way you felt about the town?
I definitely feel a connection and fondness for Astoria since leaving there and finding out about our history. Whenever friends come to visit, an Astoria tour is usually on the itinerary and they get an earful if they want it or not. A climb up the Astoria Column is on the agenda as well. The paintings on the column are a tribute to all the settlers of the area, including one image of the Tonquin. I had climbed up the column a number of times while I lived there, not knowing how close I was to the story it told.

When you came to The Armory to see Astoria: Part One, did you know that your ancestor was going to be a main character in the play?
It had been a number of years since I thought about our relative and I had forgotten many of the details of his story. I hadn't read Astoria, so I wasn't completely sure what to expect, but I said to myself: "Well, he's got to be in this play. He was on that ship." But for whatever reason, I still had doubts or just wasn't sure about his contributions.

What did it feel like when you saw his name in the program? Did you show it to anyone? How did that moment play out in real time?
My partner and I were with two other friends, so I was filling them in on the connection. I opened the program to look at the characters. I wasn't even sure of his name. I knew it was a "Mc,” a Scottish name, but for some reason I was still not sure if he would really be there. I ran across "MacKenzie" and I thought, "Is that him?" I even texted my brother at that moment asking, "What was our relative's name?" A second later: “THAT'S HIM!!! ALEXANDER MCKAY!!!" It was so exciting to see his name and whatever doubts I had about his role had vanished. It was so incredible to watch a live performance with one of your distant relatives as a main character. I had a grin on my face for the rest of the show.

What was something you learned about your family from watching Astoria: Part One?
I knew a bit from my brother's research that Alexander was a fur trader and explorer, and that he had good relations with the Indigenous tribes. His wife was half Cree. There is one part in the play where the captain of the Tonquin tries to maroon Alexander and some other men around the Falkland Islands. That was new to me and I can't imagine what it must have been like on that ship month after month with that kind of animosity.

Did you see any traits in Alexander McKay that you can relate to? Do you see any pieces of yourself in his character as depicted through the play?
My explorations westward were a bit more subdued. I rode in the comforts of a train for a month-long adventure looking for my new home. I like to think I have some of his explorer genes, but I missed out on the survival skills. My brother and I always wonder how these people made these incredible journeys. What drove them? How did they survive? We regret not asking more questions of our grandfather.

Have you done any further research on Alexander McKay since seeing the performance? If so, what’s something interesting you’ve learned about him or the founding of Astoria?
I was excited to learn more about him. There are more resources available now, so it was easy to find some new information. Another Oregon connection that I didn't know was that his widow, my great-great-great-great-grandmother, Marguerite Waddens, who was back in Canada, remarried John McLoughlin after Alexander's death. Yes, of McLoughlin Boulevard fame, known as the "Father of Oregon.” He built Fort Vancouver and his Oregon City home is now a museum. That was pretty amazing to find out. Thomas McKay, Alexander's son who made the journey with him, was also a well-known fur trader and settler in Oregon. I read that he is buried in an unmarked grave near Scappoose. The play rekindled my interest in my family history. I am so looking forward to seeing Astoria: Part Two and the rest of the story.