The voyageurs, French Canadians who engaged in the transporting of furs by canoe, sang centuries-old songs for pleasure, to describe their world or to give rhythm to their work. Many were highly poetic and inspirational. Their music was not just about everyday routines. They also sang of their duties, leaving their loved ones, and even of food. Songs were repetitive and the rhythms followed the strokes of the canoe paddles. Each song told stories of adventure, lost love, they fell into three categories:

C'est l'aviron - tells the story of a man who meets three young ladies on his journeys.

V'la Bon Vent - originated in France as a story song. In Canada, it evolved into a song for paddling or rowing.

Chevaliers de la Table Ronde - a popular drinking song  showcasing the theme of knights of the Round Table as synonymous with friends of wine.

Apres de ma Blonde - The song tells the story of a lady who laments to the birds in her father's garden that her husband is a prisoner in Holland. It appeared during or soon after the Franco-Dutch War (1672 – 78), during the reign of Louis XIV, when French sailors and soldiers were commonly imprisoned in the Netherlands.

A la Claire Fontaine -  lost love between a young man and a young woman.

J'entends le Moulin (Tique Tique Taque) - This song has been well known in some French provinces since at least the 1880's. The text appears, at times, to be nonsensical with its "game of rhymes" in which the final syllables of each line all rhyme with the "tends" of "J'entends."

A Saint-Malo Beau Port de Mer - Of a bright and lively character, the song comes from the northwest of France and is thought to have become popular because of the 1837 rebellion, when St-Malo and patriotism were synonymous. 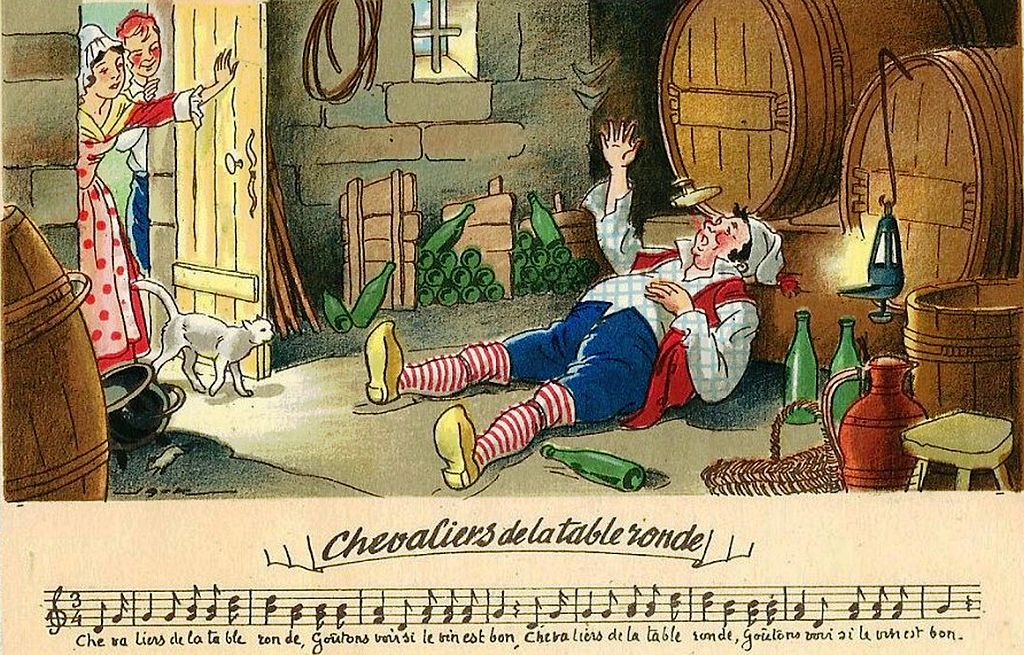 Shenandoah appears to have originated with Canadian and American voyageurs or fur traders traveling down the Missouri River in canoes, and has developed several different sets of lyrics.

I Am Stretched on Your Grave is a translation of an anonymous 17th century Irish poem titled "Táim sínte ar do thuama."

10,000 Miles Fare Thee Well (sometimes known as The Turtle Dove) is an 18th-century English folk ballad, in which a lover bids farewell before setting off on a journey.

Wild Rover is considered to be one of the most widely performed Irish drinking songs, although its exact origins are unknown.

Amazing Grace is a Christian hymn published in 1779, with words written by the English poet and Anglican clergyman John Newton (1725–1807). With the message that forgiveness and redemption are possible regardless of sins committed and that the soul can be delivered from despair through the mercy of God, "Amazing Grace" is one of the most recognizable songs in the English-speaking world.

Auld Lang Syne is a Scots poem written by Robert Burns in 1788 and usually set to the tune of a traditional folk song. Well known throughout the world, the traditional use being to bid farewell to the old year at the stroke of midnight.

Saucy Sailor According to Stan Hugill, this shanty probably originated in the 18th century. There are several variants both in England and America. Sources differ as to whether it was a pumping shanty or a forebitter. Hugill says it was "most certainly" used when pumping a ship out.

The Parting Glass is a Scottish traditional song, often sung at the end of a gathering of friends. It was purportedly the most popular parting song sung in Scotland before Robert Burns wrote "Auld Lang Syne."