“And You Don’t Stop” — The Enduring Legacy of Hip Hop 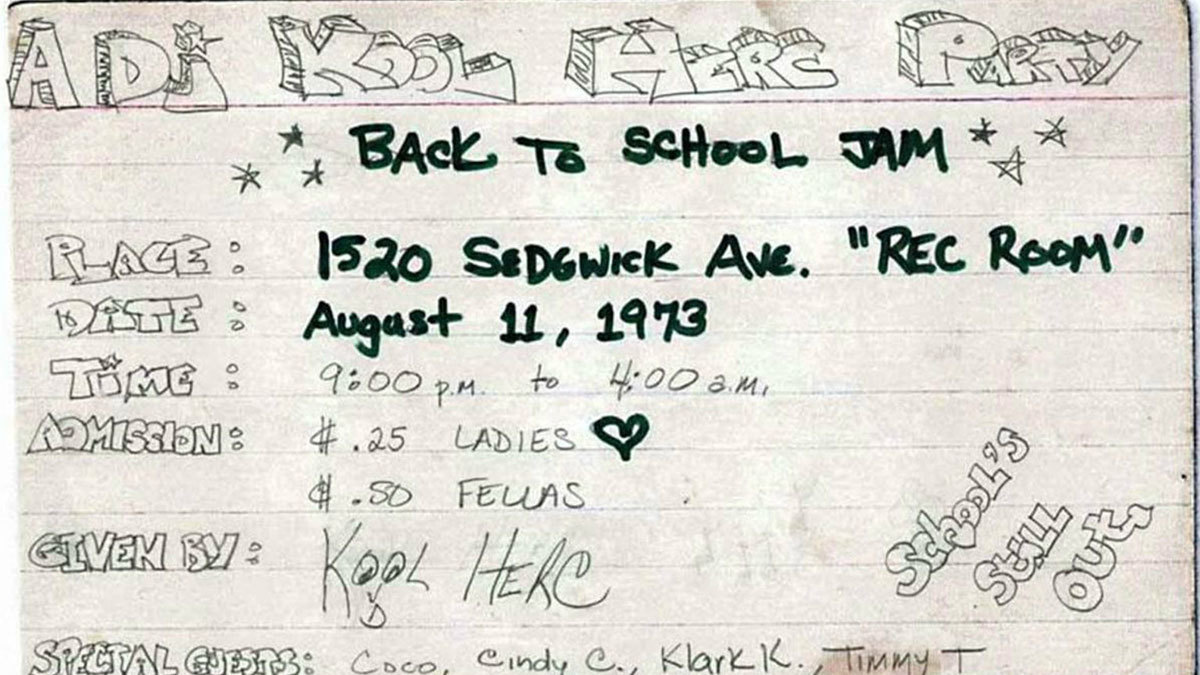 The official flyer that DJ Kool Herc posted around his neighborhood for the party that made music history.

If you happened to be in the Bronx on August 11, 1973, and you had a few quarters in your pocket, you may have become a witness to a world-changing event. At a Back to School Jam hosted in the rec room of his apartment complex, DJ Kool Herc, a teenage Jamaican immigrant, singularly invented a new art form that would evolve into a global phenomenon. By only playing the “break” — or the percussive dance sections of popular records — and using two turntables to create a loop of the instrumentals, Kool Herc gave birth to hip hop. Soon, this sound spread throughout the city and other DJs began to replicate his technique at their own parties. Afrika Bambaataa and the Zulu Nation, Grand Wizzard Theodore, and Grandmaster Flash were among those early pioneers who spun this idea into gold.

Herc and the other DJs were already “toasting” over the records they played. This tradition of talking rhythmically over the beat, encouraging partygoers to dance, and calling out their prowess as a DJ was commonplace. Often, an Emcee or MC would toast while a DJ spun and this partnership is what led to the invention of rap. Toasting was all improvisational “freestyling,” rapping brand new rhymes off the top of the head. Formalizing the toast into rhyming lyrics, creating more sophisticated sampling from existing songs, and adding new musical compositions ushered in a new era of music history.

Hip hop, however, has always been more than just music. Many early artists, especially Afrika Bambaataa and the Zulu Nation, saw it as a way to shift the culture, mitigate the gang wars, and provide an outlet for young Black and Brown people to express their frustrations with the wider socio-political climate in which they lived. The natural competition that existed between DJs, MCs, and B-Boys was more collaborative than adversarial and led to the creation of a complex and democratized culture where the only barrier between being the best was beating the best. The ingredients of this new culture, or what many historians call the “Pillars of Hip Hop,” were DJing, MCing, Break Dancing, Graffiti, and Knowledge of Self — meaning there were infinite ways to be a part of the movement, allowing for its rapid spread into mainstream culture.

Though the beginnings can be traced to that Jam in 1973, the first major rap record was released in 1980 and The Sugar Hill Gang’s Rapper’s Delight changed the game forever. Suddenly hip hop was not just for the rec rooms and gym jams — now it was for the radio, and very soon the revolution would be televised. Some of the early creators saw this as the downfall of the culture, worried that its spread would dilute its impact, but they could not foresee the way it would take over the music industry and ultimately influence the entire world. The DNA of hip hop has bled into fashion and beauty, film, dance styles, even sports, and other forms of entertainment and expression.

Many consider the Golden Age of Hip Hop to be the late 80s into the 90s. As it hit the mainstream, artists from other parts of the country began to put their own stamp on the art form, creating new sounds and distinct styles. West Coast rappers like Tupac Shakur, N.W.A., and Snoop Dogg, Southerners like Goodie Mob, OutKast, and DJ Screw, and Midwesterners like Slum Village, J Dilla, and Bone Thugs-N-Harmony made hip hop their own. As major music labels signed these and other artists a new era began — the era of the Hip Hop Mogul. In the late 90s and early 2000s, rap super-producers like Puff Daddy, Dr. Dre, and Jay-Z turned their music into multi-billion dollar enterprises. For many years, hip hop was the number one music genre in the world, overtaking even pop and rock. Though hip hop became commercialized, the original elements endure and evolve.

But who brought hip hop to the theater? The first rap musicals Off-Broadway, So! What Happens Now? and Jam on the Groove, premiered in the early 90s and featured artists like B-Boys Mr. Wiggles and The Rock Steady Crew. 1996’s sensation Bring in ‘Da Noise, Bring in ‘Da Funk was infused with hip hop culture and opened the door for who is probably one of the most famous hip hop theatermakers — Lin-Manuel Miranda, who broke the genre open with In the Heights and Hamilton and co-founded the group that would become Freestyle Love Supreme.

Hip hop music, culture, style, and art is an ever-shifting landscape that is rooted in region and perspective. Rap is about one’s periphery and that means that the identity of those participating in its culture is the bedrock on which a worldwide community is built. Hip hop is in many ways a performance, an attitude, a presentation of self — and perhaps one of the few fully democratized cultures which only survives off the strength of what its participants deem dope. Hip hop, in every context including the theater, is a collective experience meant to pull from the energy surrounding it and give the beauty it bears right back to the people. Almost 50 years after Kool Herc dropped the needle on the break of “Apache” by The Incredible Bongo Band his iconic toasts still signal the power and endurance of Hip Hop: “Yes, yes y’all and you don’t stop.” 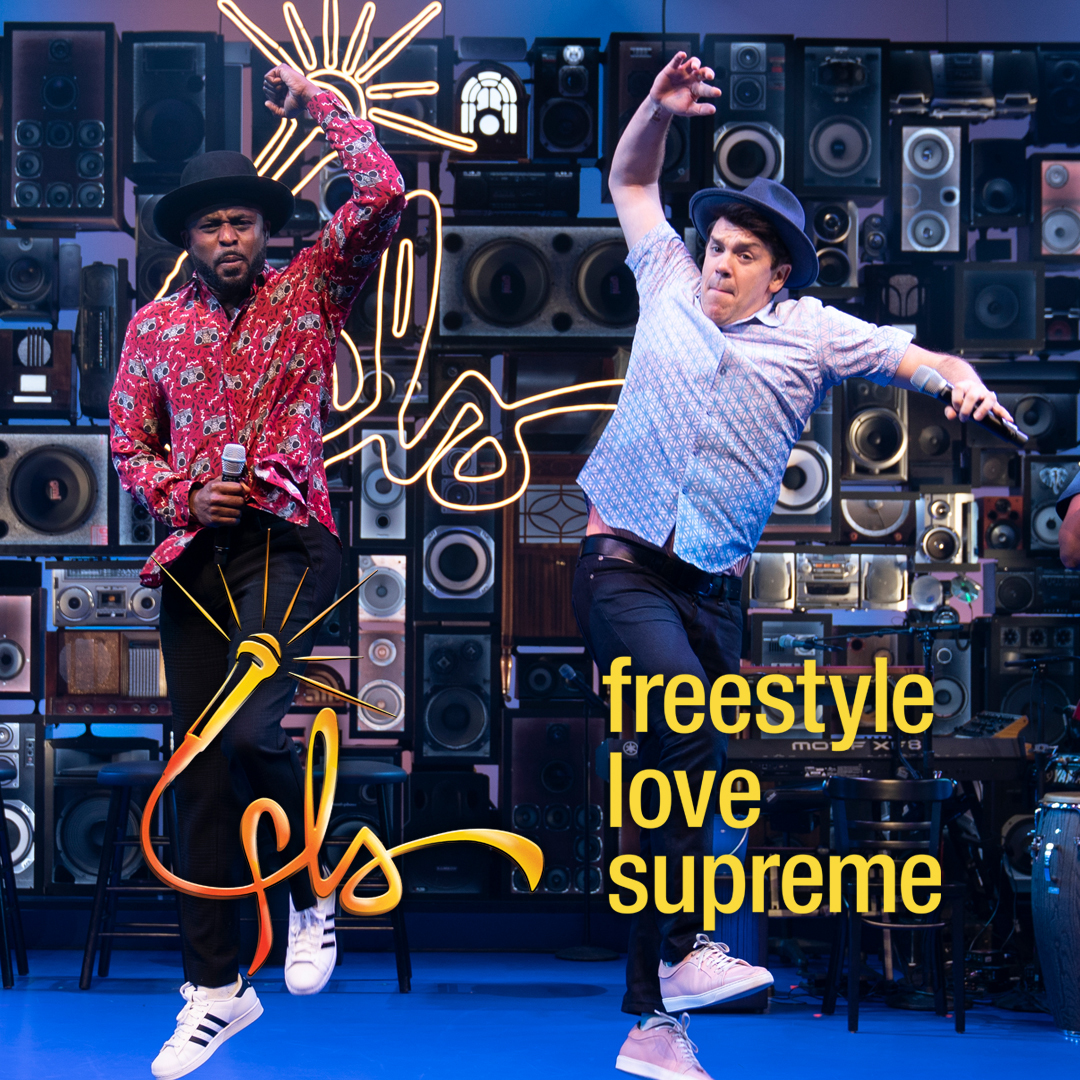 "What distinguishes Freestyle Love Supreme from other Broadway songfests is that its numbers spring into existence before your very eyes, or ears. And you, dear audience members, are the co-authors of these numbers — feeding the onstage crew the words, ideas, and emotions that they then transform into improbably rhymed performance pieces." –The New York Times 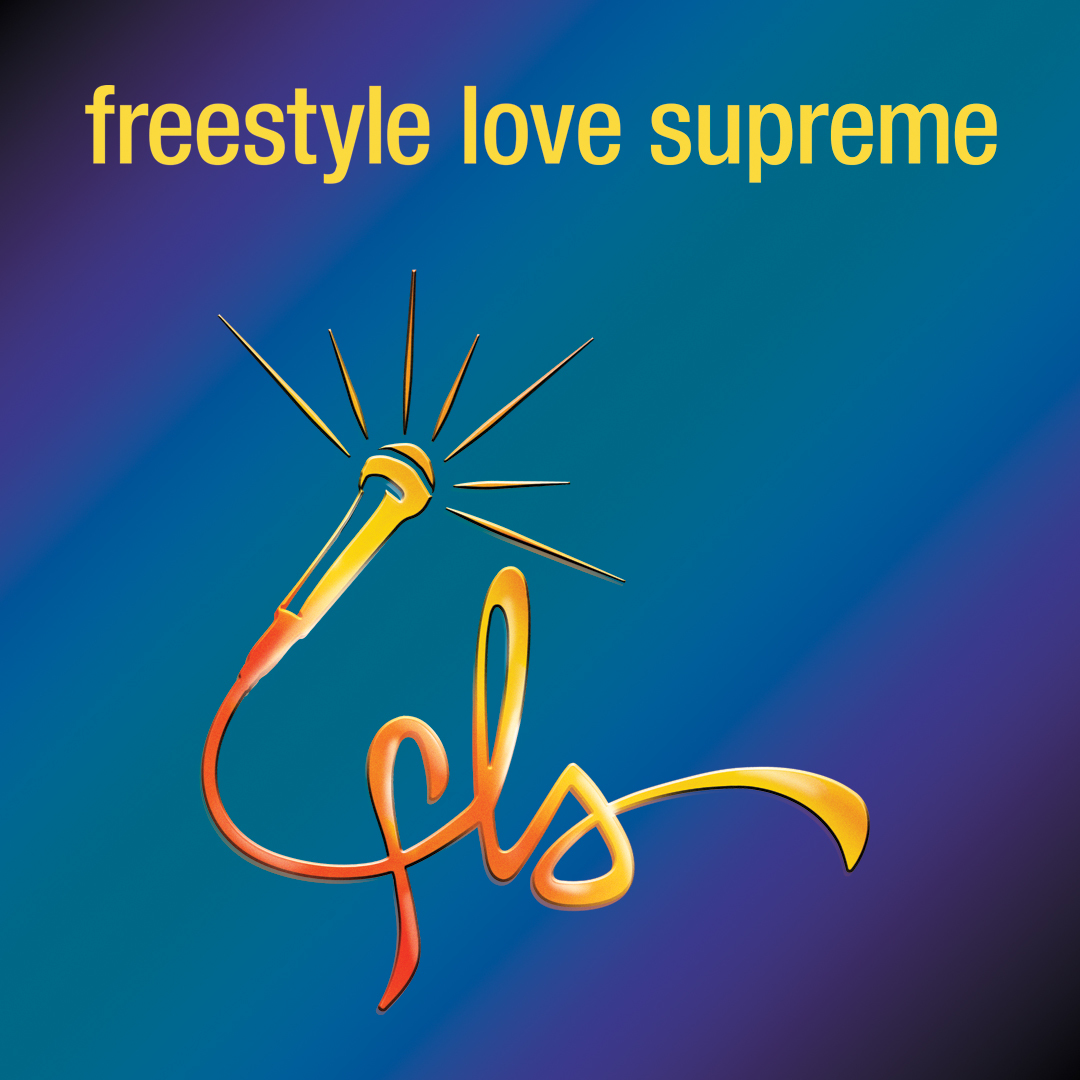 Behind the Scenes of Freestyle Love Supreme

Joelle Garguilo of "New York Like" talks with Anthony Veneziale and Aneesa Folds about the evolution of Freestyle Love Supreme.

Calling all readers! Multnomah County Library put together a reading list inspired by our production of Freestyle Love Supreme.