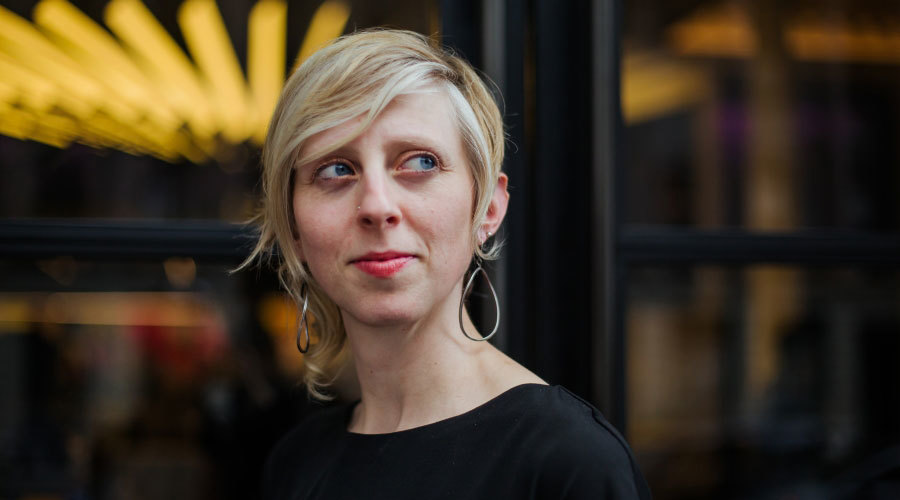 We are thrilled to welcome Marissa Wolf as our new Artistic Director!

August 22, 2018 – PORTLAND, OR. Ted Austin, Chair of the Board of Directors at Portland Center Stage at The Armory, announced today that Marissa Wolf has been selected as the next Artistic Director at Portland Center Stage at The Armory, after an eight-month, nationwide search. Wolf, most recently the Associate Artistic Director at Kansas City Repertory Theatre, previously served as the Artistic Director at San Francisco’s innovative Crowded Fire Theater. Wolf joins Managing Director Cynthia Fuhrman as co-leader of the city’s leading professional theater and begins her role full-time on September 15, 2018.

“I could not be more excited to welcome Marissa to Portland Center Stage at The Armory and to Portland. Our search process has brought us to the best possible candidate to lead our theater into its next era,” said Austin. “We set out to find someone who would appreciate how hard the staff and board have worked over the past 30 years to bring the theater to its current status as one of the country’s top regional theaters, and who would also bring a fresh vision and energy to build upon that strong foundation. We were fortunate to have an amazing field of candidates, and the experience of meeting many of them and having such rich conversations about this company was gratifying beyond our committee’s expectations. And the time spent was a terrific investment, as it resulted in inviting Marissa to join our brilliant team.”

"It is the dream of a lifetime to step into the Artistic Director position at Portland Center Stage at The Armory,” said Wolf. “I am honored to build on Chris Coleman's powerhouse legacy of adventurous theater in the breathtaking, historic Armory, and I am thrilled to lead this extraordinary company into the next chapter of growth and vitality. Together with Cynthia Fuhrman and the talented board and staff, I look forward to furthering Portland Center Stage as a national leader at the forefront of the American theater, and a cultural home in which all Portlanders belong."

Upon hearing of Wolf’s appointment, Oskar Eustis, Artistic Director of The Public Theater in New York and a producer who has worked with Wolf over the years, commented that "Marissa Wolf is a rising star of the American theater. She has a dazzling spirit, spectacular taste, and a fierce vision which she imparts with grace and wit. Her institutional and artistic brilliance has led her to this moment. Portland Center Stage is lucky to have nabbed her just as her talent is fully exploding."

“Marissa’s impressive work to date shows her to be a champion of new voices and an inspiring and thoughtful leader; she is also an artist who is interested in honoring the strong traditions and history of the regional theater,” noted Fuhrman. “I have seen Portland Center Stage at The Armory grow and change over its history in exciting ways, and I’m thankful for the leadership of former Artistic Director Chris Coleman to bring us to where we are today. With Marissa Wolf coming in as our new artistic leader, I know we will be well-positioned to take the next significant leaps in developing new work, deepening our community engagement, continuing to grow our audience, and taking a leading role in the movement to create a more inclusive American theater. I can’t wait to launch our partnership!”

The hiring of Wolf also officially solidifies a new structure of leadership at Portland Center Stage at The Armory, with the Artistic Director and Managing Director co-leading the theater and both reporting to the theater’s Board of Directors. This is a more typical structure among theaters of this scale, which emerged in the past season from the previous structure, where Chris Coleman was the sole leader of the company, supported by a strong leadership team. In this new structure, the Artistic Director has oversight of the artistic and production teams, with the Managing Director leads the administrative and operations teams.

ABOUT MARISSA WOLF
Marissa Wolf served as the Associate Artistic Director/New Works Director at Kansas City Repertory Theatre for three seasons, launching OriginKC: New Works Festival, a program that supports the creation, development and production of new work from a diverse body of major national playwrights. As part of the 2016 OriginKC: New Works Festival, Wolf directed the world premiere of Fire in Dreamland by Rinne Groff (co-commissioned by The Public Theater and Berkeley Repertory Theatre) and went on to direct its Off-Broadway premiere at The Public Theatre in June, 2018. Additional directing credits at Kansas City Repertory Theatre include the world premiere of Man in Love by Christina Anderson, The Curious Incident of the Dog in the Night-Time, The Diary of Anne Frank and A Raisin in the Sun.

PORTLAND CENTER STAGE AT THE ARMORY
Portland Center Stage at The Armory is the largest theater company in Portland and among the top 20 regional theaters in the country. Established in 1988 as a branch of the Oregon Shakespeare Festival, the company became independent in 1994. Around 150,000 visitors attend The Armory annually to enjoy a mix of classic, contemporary and world premiere productions, along with a variety of high quality education and community programs. Eleven productions are offered each season, in addition to roughly 400 community events created — in partnership with 170+ local organizations and individuals — to serve the diverse populations in the city. As part of its dedication to new play development, the company has produced 26 world premieres and presents an annual new works festival, JAW: A Playwrights Festival. Home to two theaters, The Armory, originally built in 1891, opened its doors in 2006 as the first building on the National Register of Historic Places, and the first performing arts venue in the country, to achieve a LEED Platinum rating.

THE 2018-2019 SEASON SUPPORTERS
The 2018-2019 season is funded in part by Season Superstars Tim and Mary Boyle, and Lead Corporate Champion Umpqua Bank. Further support comes from: Season Sponsors the Regional Arts and Culture Council and Oregon Arts Commission, a state agency funded by the state of Oregon and the National Endowment for the Arts; Women’s Series Sponsors Ronni Lacroute, Brigid Flanigan and Diana Gerding; and Studio Season Sponsors Mary and Don Blair. The Mark Spencer Hotel is the official hotel partner. Portland Center Stage at The Armory was selected as a participant of the Wallace Foundation’s Building Audiences for Sustainability Initiative, an effort with a nationwide cohort of 26 performing arts organizations.