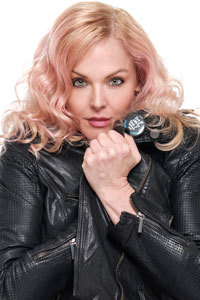 Storm is a musician, actor, playwright, and author. She shot to national prominence in 2006 as a finalist on CBS’s Rock Star: Supernova. Storm spent the ‘90s singing in clubs throughout San Francisco. She moved to Portland to pursue a career as a chef, but a last-minute cancellation in 2002 at Dante’s turned into a standing Wednesday night engagement for Storm and her new band, The Balls. It wasn’t long before she had a cult-like following in Portland and a renewed singing career that was soon to be launched onto the international stage. Storm made her debut at Portland Center Stage at The Armory in 2007 as Sally Bowles in Cabaret. The company then commissioned her to create the autobiographical musical Crazy Enough, which she developed JAW: A Playwrights Festival in 2008. Crazy Enough premiered in 2009 in the Ellyn Bye Studio, playing to packed houses during a record-breaking 143-performance run. The show inspired Storm’s album and memoir of the same name. The memoir was named Oprah’s Book of the Week and won the Oregon Book Award for Creative Nonfiction. Storm went on to perform a cabaret version of Crazy Enough at Edinburgh Festival Fringe, the Adelaide Festival in Australia, and Joe’s Pub at The Public Theater in New York. In 2011, she made her debut as guest vocalist with the band Pink Martini, singing four sold-out concerts with the National Symphony Orchestra at The Kennedy Center. She continues to perform with the band, touring nationally and internationally. As a soloist, Storm has made repeated appearances at Carnegie Hall, The Kennedy Center, and The Hollywood Bowl. Storm has also sung with Grammy-winner k.d. lang, pianist Kirill Gerstein, punk rocker John Doe, singer/songwriter Rufus Wainwright, and Rock and Roll Hall of Famer George Clinton. Storm and her band Le Bonheur also tour concert halls across the country.

James Beaton, Music Director/Keys
Originally from the Bronx in New York City, James is an award-winning composer, music director, and pianist living in Portland, Oregon. After graduating from The Evergreen State College, he toured and recorded extensively with the rock band Everclear, with numerous appearances on film and television, before co-founding the notorious cabaret band The Balls.  With Storm Large, his collaborator for nearly two decades, James composed and music directed Crazy Enough, which debuted at Portland Center Stage at The Armory in 2009, with further productions in Australia and at the Edinburgh Festival Fringe. Since 2010, they have premiered new works annually with the Oregon Symphony. In 2014, James was nominated for a Drammy Award for the musical direction of the rock opera Lizzie. James continues to compose and tour internationally. He is delighted to be returning to The Armory.

Scott Weddle, Guitar
Scott is originally from Montana and graduated from Lewis and Clark College. He was a member of the Portland Americana band The Flatirons before founding the Portland group Amelia. Scott played drums in the original 2009 production of Crazy Enough and has accompanied Storm on the guitar ever since. He returned to Portland Center Stage at The Armory in 2014 to play guitar in LIZZIE. Scott also records and performs with his talented singer/songwriter wife, Sarah Gwen, and makes music under the name Neighbor Boy.

Matthew Brown, Bass
Born in Oregon, Matt is a multi-instrumentalist who studied music at the University of North Texas and Mount Hood Community College. Matt currently plays regularly with Storm Large, Redray Frazier, and Miss Michael Jodell. He's also been a member of She & Him, The Motels, and The Baseboard Heaters.

Greg Eklund, Drums
Unable to be involved in the original debut of Crazy Enough due to the birth of his second child, Greg was asked by Storm and James to play on Crazy Enough’s original soundtrack. He joined Storm’s band later that year, and for the last decade has performed with her on stage from Portland’s own Dante’s to The Kennedy Center and the Sydney Opera House. He performed in Crazy Enough at Edinburgh Festival Fringe in 2010 and the Adelaide Cabaret Festival in 2011. For his work with ‘90s Portland rock band Everclear, Greg was inducted into the Oregon Music Hall of Fame in 2012. He would like to thank his wife, Ellina, and sons, Desmund and Dekker, for their love and support over the past 10 years.

Derek Easton, Scenic Designer
Derek is excited to be working as a scenic designer for Portland Center Stage at The Armory for the first time, starting small and looking forward to the next opportunity. Derek has also been The Armory’s technical director for the last two years. His past credits include scenic, lighting, and video design for over 50 shows at Theatre Cedar Rapids in Iowa, as well as being the company’s technical director for seven years. Prior to that, Derek worked for Actors Theatre of Louisville’s lighting department, and did lighting design work with Aspen Music Festival and School’s opera program, Theatreworks, in Colorado Springs and for StageOne Family Theatre in Louisville. If interested in seeing more of his work, visit derek-easton.com.

Daniel Meeker, Lighting Designer
Portland Center Stage at The Armory: lighting for Twist Your Dickens, Lauren Weedman Doesn’t Live Here Anymore, and Wild and Reckless; scenery for A Christmas Memory/Winter Song, The People's Republic of Portland, and Red (Drammy Award); scenery and lighting for Kodachrome, Vanya and Sonia and Masha and Spike, The Typographer’s Dream, LIZZIE (Drammy Award for lighting), The Last Five Years, and The Mountaintop. Local design credits include shows for Portland Playhouse, Portland Opera, Oregon Children’s Theatre, Profile Theater, and Artists Repertory Theatre. Outside of theater, Daniel is the lighting director for Pickathon and the principal designer of The American Art Fair and The Winter Antiques Show. Daniel is a graduate of Ithaca College and The Yale School of Drama, and a member of United Scenic Artists.

Evan Duckworth, Sound Designer
Evan is excited to pick up his first design credit here at The Armory. Hailing from Chicago, he bounced around the Midwest mixing and programming before making his way out to Portland last July. Recent credits include programming work for Steppenwolf Theatre Company’s 2017-2018 season, serving as A1 for Million Dollar Quartet at The Little Theatre on the Square, and returning to his alma mater to design The Phantom of the Opera. Since starting at The Armory, he has served as A1 on The Color Purple and Sense and Sensibility.

Mark Tynan, Stage Manager
Imagine being in a room full of artists, watching the birth of an idea, a movement given purpose, a sentence, phrase, scene, act given life. Then imagine that room translating to the stage with lighting, sound, costumes, scenery, and props; then you can imagine what Mark’s job is like. Special thanks to the stage management apprentices, Alexis Ellis-Alvarez, Molly Reed, and Sarah Stark. Prior to Portland Center Stage at The Armory, Mark toured nationally and internationally with musicals including Dreamgirls, The King and I with Rudolf Nureyev, How to Succeed …, Grand Hotel, The Phantom of the Opera, Rent, and Jersey Boys. Other Portland credits include several summers with Broadway Rose Theatre Company in Tigard. Regional credits include Alley Theatre, La Jolla Playhouse, and Casa Mañana Theatre.