The following is excerpted from an OPB Think Out Loud interview with Astoria author Peter Stark. View the complete interview here.

Over 200 years ago, there was only one tradable good coming out of the Northwest: furs. And rich people — from China to New York to the capitals of Europe — all wanted them.

German-born, New York-based entrepreneur John Jacob Astor had a grand plan to corner the Northwest fur market and start a global trading hub based out of modern-day Astoria. In current terms, his ambitious plan was like Amazon, a shipping company and a private navy all combined.

In his new book Astoria: John Jacob Astor and Thomas Jefferson’s Lost Pacific Empire, Peter Stark writes, “early accounts described it, [as] ‘the largest commercial enterprise the world has ever known.’” Stark joined Think Out Loud for a conversation about Astor’s ambitious plan, its promise and its failure.

Dave Miller: John Jacob Astor came from very meager beginnings from a small town in Germany. He was destined to become a butcher, but he became one of the richest men in the world. How did he succeed in the new world?

Peter Stark: He was a very smart young man, very focused and ambitious. He left his town of Waldorf in Germany, came to England where his brother was working for a musical instrument company. He waited for the Revolutionary War to end in the U.S. Once it did, he came over carrying finely crafted musical instruments from England and sold them in the small port town of New York on Manhattan Island.

He soon realized he could import these finely crafted products from Europe and export furs from North America where there were an abundance of wild animals. And make tremendous profits each way.

PS: Astor wanted to essentially corner the market on furs worldwide. He wanted to gather sea otter furs, including from Russian outposts up in Alaska, gather beaver pelts from the whole Rocky Mountain region and funnel all the furs of western North America through an ‘emporium’ at the mouth of the Columbia River. Send them to China, where they would be sold for a high markup. There his ships would buy silks, furs and porcelain and take those goods back to London and New York. He would create a trans-global trade that’s profiting every step of the way.

DM: What this took – especially in this age – was a sense of seeing the entire world in a way that was maybe relatively unique at that time.

PS: Both he and Thomas Jefferson, who was enthusiastically backing the Astor plan, realized that the Pacific was this untapped resource. Captain Cook had only explored the Pacific 20 or 30 years earlier. So they began to see the Pacific as a center of commerce and global trade the way the Atlantic was in their day.

DM: So Astor is going to have a ship sail all the way around the tip of South America and go to the mouth of the Columbia. At the same time he’s going to have the overland team. This is a group who will travel by foot, canoe, horseback and cross the length of the North American continent. They will meet together and then they will start this emporium.

Let’s start with the ship, the Tonquin … 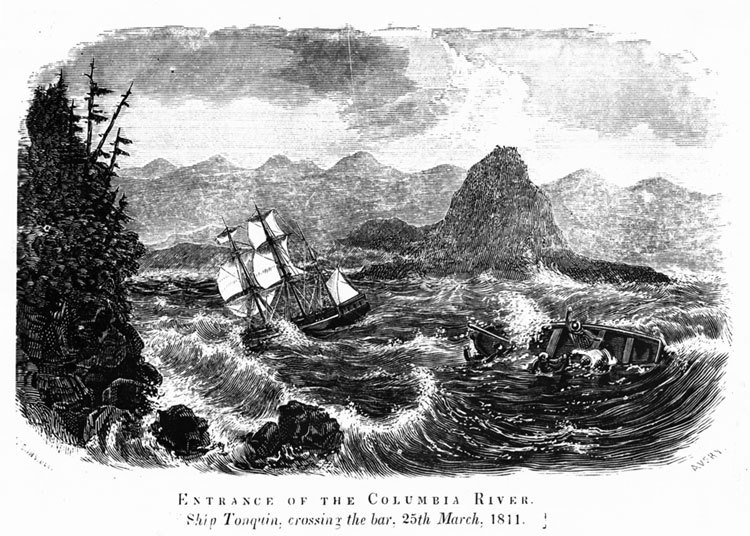 ​On 25th March 1811, the Tonquin loses the crew of a rowing boat while crossing the bar at the mouth of the Columbia River to establish a fur trading post for John Jacob Astor.

PS: The problems started the first night out of New York. Astor had hired Captain Thorn, a U.S. Naval hero, to command the ship. He was fearless in battle but had never captained a commercial ship. The commercial ship not only carried the crew but it also held as passengers a number of Scottish fur traders from Canada, a number of voyageurs and a number of young clerks who were very spirited young men.

So, the first night out of New York harbor Captain Thorn said we’re going to have lights out at 8:00 p.m. The fur traders and voyagers said, ‘We’re not done smoking our pipes and talking.’ The captain said, ‘Oh yes, you are.’ They said, ‘Oh no, we’re not. We own part of this ship.’ It came to drawing pistols. And it all deteriorated from there.

DM: What happened not too long after that as the ship went up the Northwest coast?

PS: The Tonquin continued up the coast with Captain Thorn up to Vancouver Island to trade for sea otter furs with the Native American tribes up there. Captain Thorn very quickly got into an argument with a Native American elder who was bargaining for furs. Thorn thought he was asking too high a price and took a sea otter fur and rubbed it in the Indian elder’s face. That was a bad mistake.

The next day, the Indians paddled up to the Tonquin in their long canoes holding up bundles of sea otter furs, saying, ‘We’ll trade at your price.’ Thorn let them aboard. Pretty soon there were a lot of Indians trading furs on the ship. His fur traders were saying, ‘Time to leave, time to leave.’ And Thorn finally said, ‘OK, it’s time to leave now.’ Just as he gave the command to leave, all the Indian warriors aboard pulled out war clubs from their bundles of sea otter furs and attacked the crew. Massacring almost all of them. Eventually, they all perished except a man from Thorn’s crew who ended up becoming essentially a suicide bomber and blowing up the ship with 8,000 pounds of gun powder and something like 200 Indians aboard it.

DM: So, that was the part of the team that Astor sent by sea. He also sent a group overland. Among the folks in the team going across the continent were these French Canadian canoers, the voyageurs.

Stark gives a description of the extraordinary feats accomplished by the voyageurs.

DM: What would have happened if Astoria, as John Jacob Astor intended, had thrived? If there had been no War of 1812, and this capitalist, imperial outpost would have survived?

PS: A number of things could have happened. The entire West Coast of North America might be United States territory. In other words, no British Columbia — from Alaska to Mexico. The Pacific Rim might have become much more prominent in ours and the world’s history. China might have opened up much sooner than it did because there would have been a very highly developed cross-Pacific trade from the Northwest.

There was a philosophical question left behind in all of this. Thomas Jefferson saw this West Coast colony as the seed of a separate democracy on the West Coast. And Astor saw it as a business empire. Would that have come into conflict? Would we have to choose between a business empire or a democracy? I think that reflects in our foreign policy even today.