Inspired by Chris Coleman's adaptation of Astoria, based on the best-selling book by Peter Stark, Portland Center Stage at The Armory has developed this itinerary to encourage audiences to interact with Oregon in a unique way — by using a true story produced for the stage as a lens to explore Oregon and its rich cultural history. Watch the history unfold on stage, then explore the historical sites in person.

Be sure to share photos of your journey and tag them with #TravelAstoria.

• Start your journey by exploring the breadth of Oregon's history at The Oregon Historical Society (1200 SW Park Ave, Portland, OR). The winter exhibit, Oregon My Oregon, tells Oregon’s overall story from the region’s earliest inhabitants to early settlements and industries. www.ohs.org

• Visit Portland Center Stage at The Armory (128 NW 11th Ave, Portland, OR) to see Astoria: Part Two running on the U.S. Bank Main Stage January 14 – February 12, 2017, or catch one of seven reprise performances of Astoria: Part One. This world premiere production, based on the best-selling book by Peter Stark, tells the true story of a harrowing dual journey — one over land, one by sea. Just two years after the Lewis and Clark Expedition concluded, President Jefferson and John Jacob Astor turn their sights westward and begin one of history’s most dramatic but largely forgotten conquests. Part One is about the epic journey to Astoria, and Part Two is about the establishment of Astoria, the first permanent United States settlement on the West Coast. www.pcs.org/Astoria 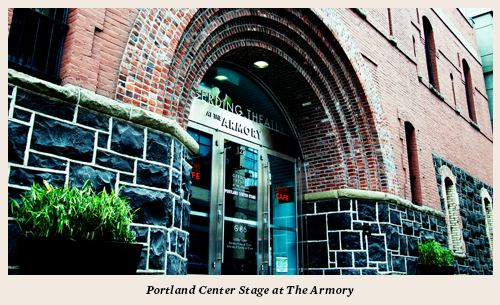 • Stay at the Mark Spencer Hotel (409 SW 11th Ave, Portland, OR), a short walk from Portland Center Stage at The Armory, shops and other Portland attractions. www.markspencer.com

• Visit Fort Stevens Park (1675 Peter Iredale Rd, Hammond, OR) containing a smorgasbord of historical sites. Fort Stevens was built in 1864 after the American Civil War (long after the Astor Expedition). It is located on the approximate site of a Clatsop Village known as Neahkeluk, the largest Native American village in the area during its time. The Park is home to one of the oldest shipwrecks on the West Coast still accessible to visitors, the Peter Iredale shipwreck, which has been stuck in the sands of the park since the early 1900s. Since 1792, approximately 2,000 large ships have sunk in and around the Columbia Bar. Due to the danger of the waters and the numerous shipwrecks, the mouth of the Columbia River has acquired a worldwide reputation as the “Graveyard of the Pacific.” A visit to the shipwreck showcases the treacherous journey faced by members of the Astor Expedition in 1848. www.oregonstateparks.org

• Stop for a quick photo opportunity at the Welcome to Astoria sign (W. Marine Drive; nearest cross streets: Taylor Ave & Hamburg Ave, Astoria, OR) on the west side of town. Next to the sign is the Astoria Sesquicentennial plaque that honors John Jacob Astor and the founding of Astoria. There is also a cedar wood carving of "Whispering Giant" Ikala Nawan by Peter Wolf Toth that honors the Clatsop, Chinook and other Northwest coastal indigenous people.

• Visit the memorial and partial replica of Fort Astoria (Exchange St & 15th St, Astoria, OR) on the backside of Fort George Brewery. Fort Astoria was established in 1811 by employees of the Astor Expedition.

• Dine at Fort George Brewery (1483 Duane St, Astoria, OR) located on the site of Fort Astoria. They offer delicious food to complement a great selection of locally brewed beers. We recommend trying the Astor Expedition Ale, a limited edition commemorative beer created in celebration of Astoria: Part Two. The brew is a partnership of Astoria Brewing Company (host brewer), Fort George Brewery, Buoy Beer, Reach Break Brewing, and Hondo’s Brew and Cork. Astor Expedition Ale is an English Pale Ale, a style of beer that was popular during the Astor Expedition. The brew will be available in Astoria at the five partner breweries following its debut on January 26, while supplies last. www.fortgeorgebrewery.com

• Discover the stories of the legendary Columbia River Bar, one of the most dangerous passages in the world, at the nationally renowned Columbia River Maritime Museum (1792 Marine Drive, Astoria, OR). Located on Astoria's historic waterfront, the museum features one of the most extensive maritime collections on the west coast, including a model replica of the Tonquin that was commanded by Captain Jonathan Thorn during the Astor Expedition. You'll also enjoy historic navigation maps and many more interactive exhibits and displays. www.crmm.org

• Climb the spiral staircase to the top of The Astoria Column (1 Coxcomb Dr, Astoria, OR) and take in the beautiful panoramic view of the Columbia River Bar. Standing a majestic 125 feet high, the column features 14 murals that depict the history of Astoria, including the Lewis and Clark Expedition and the arrival of the Astor Expedition aboard the Tonquin. Also located on Coxcomb Hill is a cement replica of Chief Comcomly’s burial canoe, a well-respected leader of the Native American Chinookan people who assisted the Astor Expedition on several occasions. www.astoriacolumn.org

This project was made possible in part by a grant from Travel Oregon.