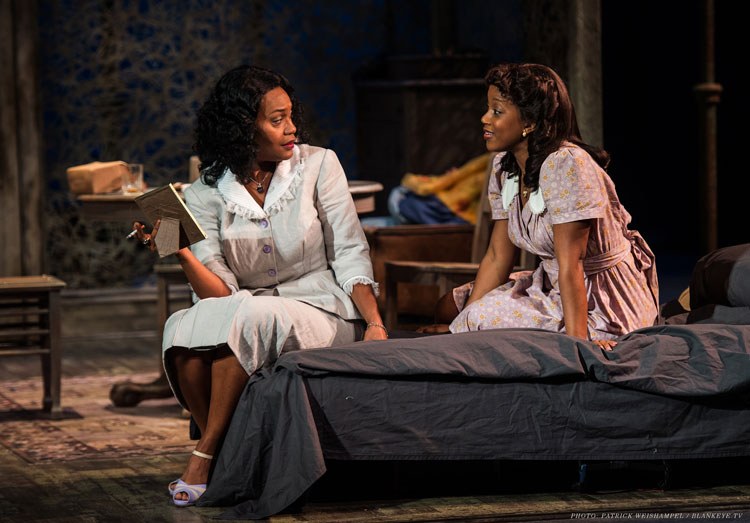 Kaitlyn Bonn, a journalism student from Clark College, visited PCS to write a news story about A Streetcar Named Desire. Kaitlyn met with Kristen Adele, who plays Stella, and Kristen Mun, the production assistant, to learn about the production. Below is the story she wrote for her college class.

Thank you for sharing this assignment with us, Kaitlyn!

Blanche DuBois hesitantly walks out from around the corner.

She squints at the paper in her hand, checking the address listed on the index card. She looks up, revealing that her expression of curiosity has turned to disbelief. She examines the dusty gray walls of the buildings that surround her. Dressed in a white suit with white gloves and a hat, she glances back at the way she came.

Two women sit on the steps chattering away. Both heads turn as Blanche looks around. “What’s the matter, honey? Are you lost,” one of the women, Eunice, asks.

A look of fear crosses Blanche’s face. She obviously does not belong on this busy New Orleans street.

“They told me to take a streetcar named Desire, and transfer to one called Cemeteries, and ride six blocks and get off at — Elysian Fields!” says Blanche with a shaky voice.

Portland Center Stage presents Tennessee Williams’ play A Streetcar Named Desire through June 19, closing its 2016-2017 season. The play shows Tuesday through Sunday at 7:30 p.m., and Saturdays and Sundays at 2 p.m., on the U.S. Bank Main Stage in Portland.

A Streetcar Named Desire examines the life of Blanche DuBois, a privileged southern belle played by Deidrie Henry, who unexpectedly arrives at the doorstep of the cramped apartment of her sister, Stella, played by Kristen Adele, and her brother-in-law, Stanley, played by Demetrius Grosse. Blanche, faced with the prospect of spending the summer in their squalid apartment, a huge step down from her plantation upbringing, clings desperately to the elite persona she’s created to help her escape her troubled past.

Over the course of one summer, Blanche’s innocent facade slowly dissolves as she meets her match in her brother-in-law, who is determined to expose the manipulative tactics that she uses on everyone, including Stella.

“Stella has to choose between her old life and her new life,” said Texas native Adele, who graduated from the Mason Gross School of Arts at Rutgers University with an M.F.A. The centerpiece of Stella’s dilemma involves dealing with her critical sister, Blanche, and her abusive husband, Stanley.

Adele said director Chris Coleman pushes each actor to personalize his or her character. Beyond studying the script, Coleman has them consider their own identities, as well as those of the character, and then find a bridge between the two.

At the heart of the play is the wild and powerful emotion of desire. “We revisit a play like Streetcar because there is something fundamental about the truth it excavates,” Coleman said in his playbill notes. “Something thrilling about the power it continues to exert.”

Coleman also works with crew members to intensify the emotion Williams has at the center of his play. This largely involves the technical effects.

“The lights, sound and set bring the whole environment to life,” said Production Assistant Kristen Mun. Mun is originally from Hawaii and graduated from Southern Oregon University with a B.F.A. in Stage Management. This is her third season at Portland Center Stage.

While Mun is backstage, Stage Manager Mark Tynan follows the show from the house, calling the cues and tracking the actors and technical elements as they are viewed by the audience.

Audiences seem to respond positively to the production.

“I liked it for the realism,” said Dominick de Landro, who attended the play in late May. This information technology manager, who lives and works in Vancouver, said he appreciated the emotional richness of the play, specifically, “the rawness of it, without being too over the top.”

A Streetcar Named Desire is recommended for ages 14 years and older. The play contains mature content including strong language and domestic violence. Tickets are $25-$69.

"Sixty years after its debut, Williams' masterpiece still has the power to seduce and shock." –The Oregonian