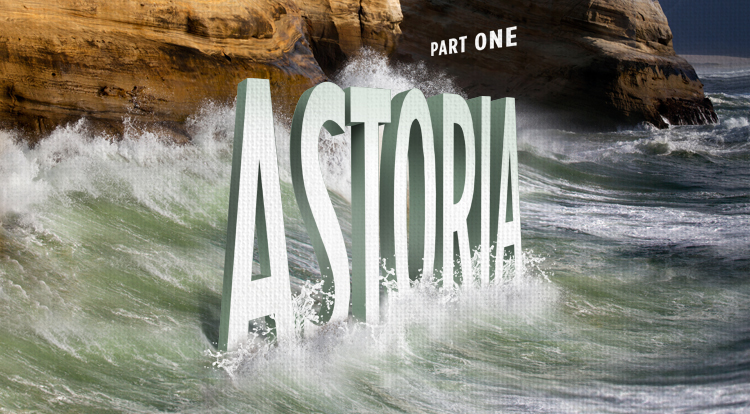 Astoria: Part One
Adapted and Directed by Chris Coleman
Based on the book ASTORIA:
John Jacob Astor and Thomas Jefferson’s Lost Pacific Empire,
A Story of Wealth, Ambition, and Survival
By Peter Stark

Chris Coleman
Adaptor/Director
Chris joined Portland Center Stage at The Armory as artistic director in 2000. Before coming to Portland, Chris was the artistic director at Actor’s Express in Atlanta, a company he co-founded in the basement of an old church in 1988. Chris returned to Atlanta in 2015 to direct the world premiere of Edward Foote at Alliance Theatre (Suzi Bass Award for Best Direction, Best Production and Best World Premiere). Other recent directing credits include the Off-Broadway debut of Threesome at 59E59 Theaters; a production that had its world premiere at The Armory. Favorite directing assignments for The Armory include A Streetcar Named Desire, Ain’t Misbehavin’, Three Days of Rain, Threesome, Fiddler on the Roof, Clybourne Park, Shakespeare’s Amazing Cymbeline (which he also adapted), Anna Karenina, Oklahoma!, Snow Falling on Cedars, Crazy Enough, King Lear, Outrage and The Devils. Chris has directed at theaters across the country, including Actor’s Theater of Louisville, Oregon Shakespeare Festival, ACT Theatre (Seattle), The Alliance, Dallas Theatre Center, Pittsburgh Public Theatre, New York Theatre Workshop and Center Stage (Baltimore). A native Atlantan, Chris holds a B.F.A. from Baylor University and an M.F.A. from Carnegie Mellon. He is currently the board president for the Cultural Advocacy Coalition. Chris and his husband, Rodney Hicks – who is appearing in the new musical Come From Away, which opens on Broadway in March – are the proud parents of an 18-lb Jack Russell/Lab mix, and a 110-lb English Blockhead Yellow Lab. For the past three years, Chris has had the honor of serving as the director for the Oregon Leadership Summit.

Peter Stark
Author
Born in Wisconsin to an adventurous family and a father with a passion for the history of the fur trade, Peter Stark studied English and anthropology at Dartmouth College and received a master’s in journalism from the University of Wisconsin. Using Missoula, Montana, as a base, he took off for the remote spots of the world, writing magazine articles about travel and adventure in places like Greenland, Tibet and Africa. This fueled an interest in wilderness and the history of exploration, resulting in a number of books, including the book on which the play Astoria is based: ASTORIA: John Jacob Astor and Thomas Jefferson’s Lost Pacific Empire, A Story of Wealth, Ambition, and Survival. He and his wife, the intrepid dancer, choreographer and writer Amy Ragsdale, and their two children have periodically lived abroad for a year, most recently in a small town in Northeast Brazil.

Diane Ferry Williams
Lighting Designer
Diane Ferry Williams is pleased to be returning to Portland. Diane has worked for many theaters around the country and abroad. Her most recent design is a national tour of How to Succeed beginning in Beijing, China. In the U.S., she has worked for many theaters around the country, including The Marriott Theatre in Chicago, The Alliance Theatre, Theatre Under the Stars, Goodspeed, Chicago Shakespeare Theatre, Goodman Theatre, Pittsburgh Public Theatre, ACT-Seattle, Alabama Shakespeare Festival, Ford’s Theatre, Hubbard Street and Regional Dance America. Other international work includes The Harlem Gospel Singers in Paris and the European tour, and Die Shone Und Das Biest in Berlin and the European tour. She has also lit several national tours and premieres. Awards include a Jeff Award, an After Dark Award, a Carbonelle Award, Drammy Awards – including the 2015 Drammy and PAMPTA awards for Ain’t Misbehavin’ – and seven Jeff nominations. Diane has an M.F.A in Theatrical Design from Northwestern University.

Mary McDonald-Lewis
Dialect Coach
Mary McDonald-Lewis has been a professional artist since 1979. She resides in Portland, Oregon, and is an international dialect coach for film, television and stage. She also works as a voice actor, on-camera actor, stage actor and director. Astoria is MaryMac's 27th show with Portland Center Stage at The Armory, and you can also hear her work at Artists Repertory Theatre, where she is a resident artist, voice and text director. She is deeply grateful to the patrons and audience members of The Armory, whose support allows the theater to provide her services to the actors. MaryMac loves what she does, and she thanks Finnegan, Sullivan and Flynn for always wagging their tails when she comes home.

Randall Robert Tico
Composer
This is Randall’s sixth collaboration with Chris Coleman following Othello, Anna Karenina, Shakespeare’s Amazing Cymbeline, The Imaginary Invalid and Snow Falling on Cedars. He was also the composer and sound designer for Apollo at The Armory, directed by Nancy Keystone. He received a Garland Award and an Ovation Award nomination for Apollo at the Kirk Douglas Theatre. Other productions with Keystone include Ameryka (2016 Ovation nomination) Suzan-Lori Parks’ The America Play (Theatre @ Boston Court), Antigone (The Armory, Drammy Award), The Ahkmatova Project, Dr. Faustus, The Rover and Measure for Measure. Other recent credits include the music score and sound design for Macbeth at The New Vic directed by Jonathan Fox; and Hamlet, The Winter's Tale, the vocal score for David Hare’s version of Mother Courage, and music and sound design for The Glass Menagerie, all directed by Jessica Kubzansky. For the last three years, he has been the resident composer/sound designer for the Launch Pad program at UCSB, with director Risa Brainin.

Brandon Woolley
Assistant Director
Brandon is a director and producer in Portland, Oregon. He is thrilled to be collaborating on this world premiere adaptation with such an incredible team. Directing credits include: Sex with Strangers and the upcoming Mary’s Wedding (The Armory); International Falls and The Few (CoHo Productions); The God Game (self-produced); The End of Sex (Theatre Vertigo); Dial M for Murder (Bag&Baggage Productions). Brandon has worked with Rose Riordan on multiple shows at The Armory as an assistant director (Lizzie, The Whipping Man, Red, One Flew Over the Cuckoo’s Nest and A Christmas Story). He has also collaborated with Third Rail Repertory Theatre, Broadway Rose Theatre Company, and Live On Stage. Brandon is the producing associate and JAW co-producer at The Armory. Much love to Sean, Mom and Brittney.

Benjamin Fainstein
Production Dramaturg
Benjamin Fainstein is the literary manager at The Armory. Previous dramaturgy credits include Sarah Sander’s Golden (MIDDSummer Play Lab), Kevin Artigue’s The Forcings (JAW: A Playwrights Festival), Meg Miroshnik’s The Tall Girls (Carlotta Festival of New Plays), Marcus Gardley’s The House That Will Not Stand (Berkeley Repertory Theatre, Yale Repertory Theatre), and Christopher Bayes and Steven Epp’s adaptation of Moliére’s A Doctor in Spite of Himself (Yale Repertory Theatre). Benjamin has created and premiered numerous original works, including Carnival/Invisible, The Body Politic, Cat Club, Iphigenia Among the Stars, Prototype 373-G and Paradise Sets In. He is a former artistic director of Whistler in the Dark Theatre, associate artistic director of Yale Cabaret, and managing editor of Theater magazine. He is an alumnus of Middlebury College and Yale School of Drama.

Mark Tynan
Stage Manager
Imagine being in a room full of artists, watching the birth of an idea, a movement given purpose, a sentence, phrase, scene, act given life. Then imagine that room translating to the stage with lighting, sound, costumes, scenery and props, then you can imagine what Mark’s job is like. Special thanks to the phenomenal production assistants, Stephen Kriz Gardner, Will Bailey, Kristina Mast, Bailey Anne Maxwell and Kristen Mun, who help keep the vision attainable. Prior to The Armory, Mark toured nationally and internationally with musicals including Dreamgirls, The King and I with Rudolf Nureyev, How to Succeed …, Grand Hotel, The Phantom of the Opera, Rent and Jersey Boys. Other Portland credits include several summers with Broadway Rose Theatre Company in Tigard. Regional credits include Alley Theatre (Houston, TX), La Jolla Playhouse (La Jolla, CA) and Casa Mañana Theatre (Fort Worth, TX).

Bailey Anne Maxwell
Production Assistant
Bailey Anne Maxwell is thrilled to be returning to The Armory, after acting as production assistant for Little Shop of Horrors, Stupid F**king Bird, Sex with Strangers, Other Desert Cities, Twist Your Dickens (2014 and 2015) and Dreamgirls. Bailey also worked as a deck crew member on Great Expectations last season. In the past, Bailey has worked as a production assistant with Artists Repertory Theatre on The Motherf**ker with the Hat, Foxfinder, Ten Chimneys, The Lost Boy and Seven Guitars. Bailey has recently enjoyed being the stage manager for Up the Fall with PHAME Academy and The Wizard of Oz with Broadway Rose Theatre Company. She has also worked with Profile Theatre as a stage management apprentice on Buried Child, Eyes for Consuela and In the Next Room. Bailey is a proud Linfield College graduate and a member of the EMC program.