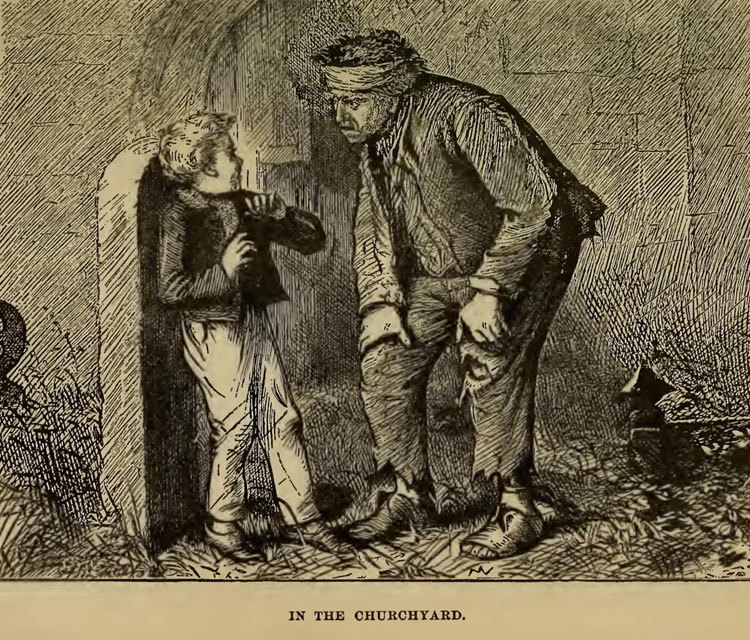 Illustration of Pip and Magwitch from the 1867 print edition of Great Expectations.

English culture underwent rapid change in the mid-eighteenth century. People of all economic classes flocked to cities like London in the wake of the period’s industrial progress. This process of urbanization gave rise to an entrepreneurial middle class with enough upward mobility to challenge the influence of the nobility. It also created an unprecedentedly large population of poor city dwellers. Some toiled in dangerous factories, while others who had come to London to seek their fortunes wound up in slums and shanty towns, destitute and starving. Scientific advances led to a new questioning of traditional religious and moral values, which sparked a broader inquiry into the integrity of social structures. The novel, which critics had considered a somewhat crude and lowbrow form of literature, soon supplanted poetry as the period’s prevailing literary form, capable as it was of capturing Britain’s sweeping changes. The complex and metaphysical poems of the Romantics were traded for the psychologically realistic characters and social commentary common to Victorian novels. Authors like Charles Dickens were celebrated for their ability to weave tapestries of cultural upheaval in a form accessible to and beloved by citizens of all backgrounds.

Dickens’ epic narratives are often populated by multitudinous casts of colorful characters, and Great Expectations is no exception. Lucinda Stroud’s adaptation hones in on the journey of Pip, Dickens’ protagonist and narrator. Pip’s story harnesses many tropes of the “coming-of-age” genre, or Bildungsroman (“novel of education/formation”), and his growth is spurred on through his interactions with dozens of diverse individuals. So many individuals, in fact, that it would be nearly impossible to have as many actors on stage as there are characters in the novel. One of the challenges in bringing Great Expectations into the theater, therefore, is determining how to include all these characters. Stroud and director Jane Jones have employed a quintessentially theatrical and spirited solution: an extensive use of role doubling. As you will see in this production, an ensemble of nine actors takes on multiple roles, transforming themselves from one character to the next as they chart Pip’s journey. This doubling not only capitalizes on the playful liveness unique to the theater, it also aligns itself with one of Dickens’ genius strokes: the extensive use of literary doubles. Dickens frequently juxtaposes two characters whose relationships to Pip are similar, but whose attitudes and methods are polar opposites from one another. These “doubles” expose Pip to a wide range of humanity and lead him to formulate his own definitions of right and wrong.

As a start, we have pointed out a few possible pairs of doubles with thematic significance on this page, and we encourage you to think about how the complex web of relationships resonates with you. What other doubles do you see in the story — and how do juxtapositions like these affect your interpretation of Great Expectations?

Our hero. Possessed of an open mind and an ambitious spirit, which leads him on a journey from the rural life of a poor blacksmith to the aristocratic social circles of London. His experiences give him the necessary scruples needed to consider situations and people from multiple perspectives.

Another of Joe’s blacksmithing apprentices. Darkhearted and wrathful, he feels trapped by his circumstances. His egotistical point of view, coupled with his extreme jealousy of Pip, leads to violence.

Miss Havisham’s adopted daughter. A model of coolheaded refinement and upper class privilege. A forerunner of the “femme fatale” archetype, Estella has been raised to break the hearts of men without remorse and has mastered the art of concealing her true feelings.

An intelligent orphan from Pip’s village. Biddy is warmhearted and generous, in contrast to Estella. Pip overlooks Biddy’s affection in his pursuit of Estella. Over time, Biddy becomes a voice of reason whenever Pip forgets his roots or finds himself in a moral quagmire.

Pip’s brother-in-law. A blacksmith. Joe and his wife, Pip’s ill-tempered sister, raise the orphaned boy. What Joe lacks in cosmopolitan breeding, he makes up for with kindness and integrity. He is an anchor for Pip’s moral compass in a sea of deceit and intrigue. Despite his lack of formal schooling, he is influential in Pip’s education as a human being.

A wealthy, reclusive spinster. Mistress of her estate at Satis House and guardian of Estella. The romantic trauma of her youth instilled in her not only a hatred of men, but also an eccentric need to distort the innocence of young love. She has a special affinity for Pip, whose sincerity challenges her manipulative nature. Her presence provides an edgy counterpoint to Joe insofar as Pip’s education. Historically speaking, her presence also suggests the lack of agency of Victorian women fallen from social graces.

Pip’s friend and fellow student of the gentlemanly arts. Sanguine and dependable. Herbert is one of the few people who not only witnesses Pip’s transformation but also takes part in the process. He becomes Pip’s lifelong companion, business partner, and de facto sidekick.

A young aristocrat. Pip’s rival for Stella’s affections. Despite the nobility of his birth, he is duller, ruder, and more abusive than his counterparts born of lower class.

A mysterious escaped prisoner. He is possessed of an emotional complexity masked by his gruff exterior. Magwitch’s journey runs parallel to Pip’s and is marked by similar reversals of fortune. His actions challenge the prejudices of a class-based justice system and demonstrate the lengths humans are willing to go to redeem themselves.

Magwitch’s fellow prison escapee. An educated, sophisticated con artist. His brutal and deceptive nature contrasts with Magwitch’s. Like Drummle, Compeyson’s presence in the story questions the assumption that goodness and honor are a matter of class and breeding.