Why Canadians Felt a Need to Fight 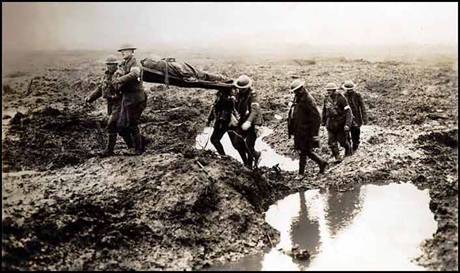 
"When the historian of the future comes to analyze the events which made it possible for the Empire to stand like this, he will see that there must have been some overmastering impulse contributing to this wonderful result.

One such impulse is to be found in the love of the liberty, the pursuit of ideals of democracy, and the desire and determination to preserve the spirit of unity founded on those ideals, which make the whole Empire united in aim and single in purpose. But there was, also, in all the Overseas Dominions, the intense conviction that this war was forced upon the Empire—that we could not with honour stand aside and see trampled underfoot the liberties and independence of a weak and unoffending nation whose independence we had guaranteed. And, above and beyond all that, was the realization of the supreme truth—that the quarrel in which we are engaged transcends even the destinies of our own Empire and involves the future of civilization and of the world. -Prime Minister of Canada, Sir Robert Laird Borden Overseas Dominions’ Destiny, London, July 29, 1915

War is terrifying, deadly, lonely, a horrific place to be, yet it also has an appeal of romance and duty. Propaganda plays a large part in building that sense of duty and romance. Posters plastered all over the towns of each country involved in the war, promoted the support of its men, women, and children for the war. They urged citizens to enlist, buy war bonds, and conserve their resources. They were a very effective tool in culminating national pride, utter hatred for the enemy, and praise of sacrifice.

But why did Canadians join the WWI war effort? The answer for many was simple, they were loyal subjects of the King of England. They were colonists in Canada, but felt a need to defend the “Mother Country.” Sir Wilfrid Laurier spoke for the majority of Canadians when he proclaimed: "It is our duty to let Great Britain know and to let the friends and foes of Great Britain know that there is in Canada but one mind and one heart and that all Canadians are behind the Mother Country." Prime Minister Robert Borden, calling for a supreme national effort, offered Canadian assistance to Great Britain. The offer was accepted, and immediately orders were given for the mobilization of an expeditionary force. For French colonists, however, it was not as easy to fight in the Canadian Cavalry and Regiments. This war brought about much hostility and resent­ment between French and British Canadians. Nevertheless, they did fight, and served the Allies well. They were respected as an army, and had goals above their own monetary interest. In return for their efforts, Canada conquered no new lands, nor did they prosper in the wealth of the losing nations. Those Canadians who fought did so because they felt it was their duty. This Great War was served by over 650,000 Canadian soldiers of whom 200,000 were injured, and 60,000 died. Thousands of women also took to heart their commitment and duty to their country. They were carried by the motto of the Canadian Army Corps- “Consentientes Vi Trahunt Victoriam,” “those in agreement seize victory by force.”

Although technically, still under British rule, the valiant contributions set forth by the Canadian Military earned them an independent signature on the Treaty of Versailles." 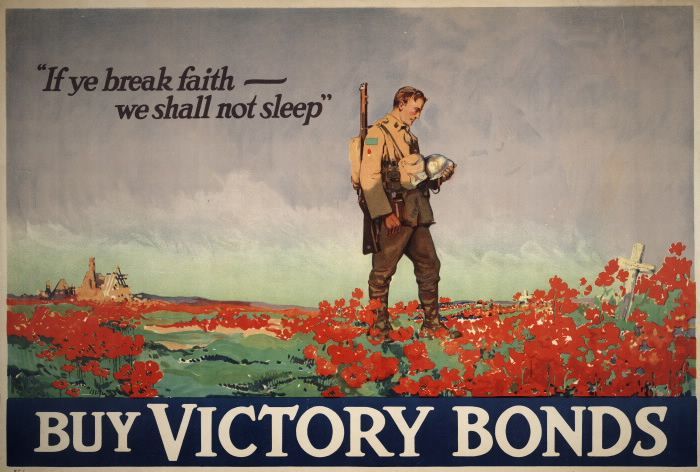 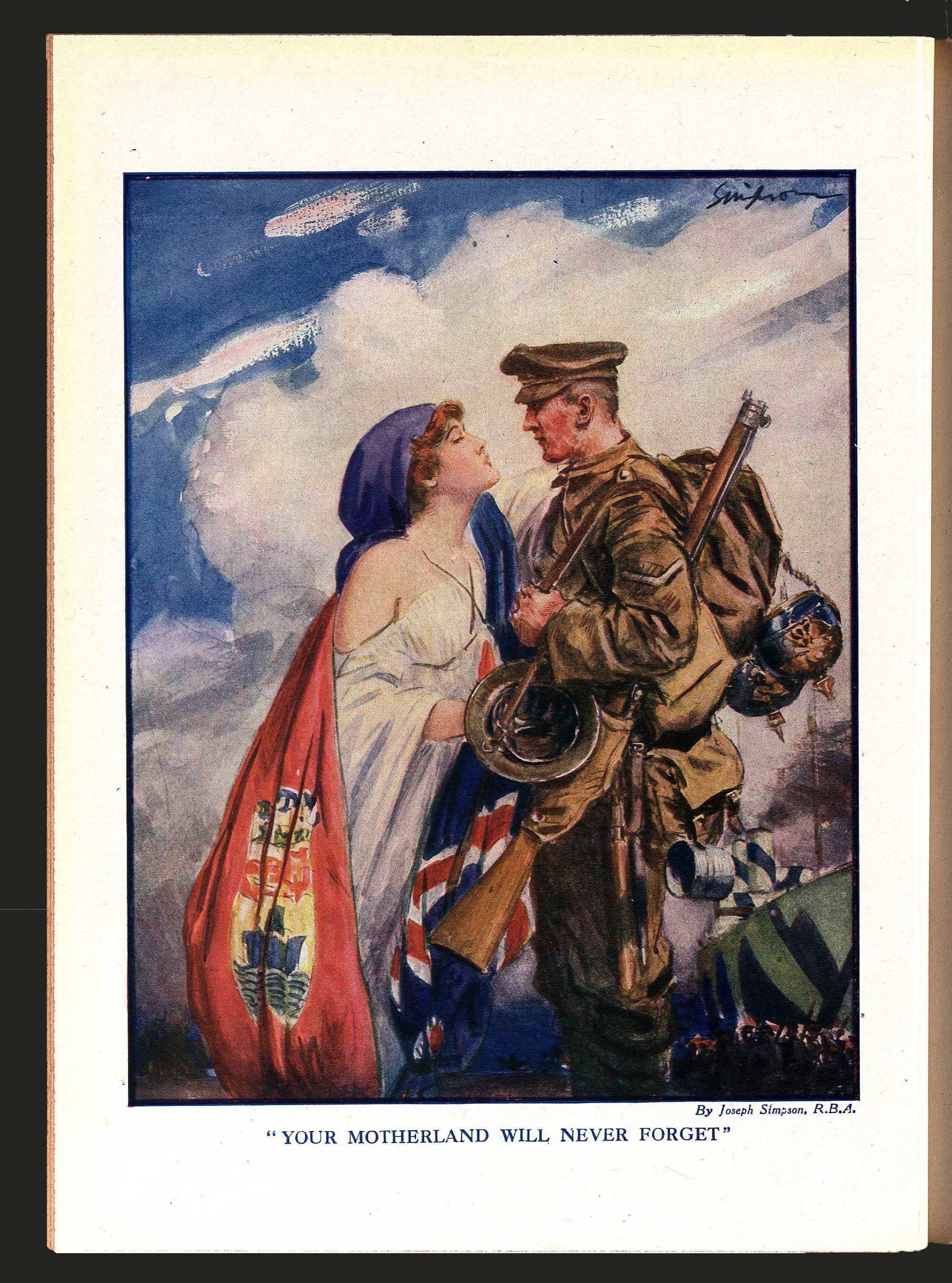 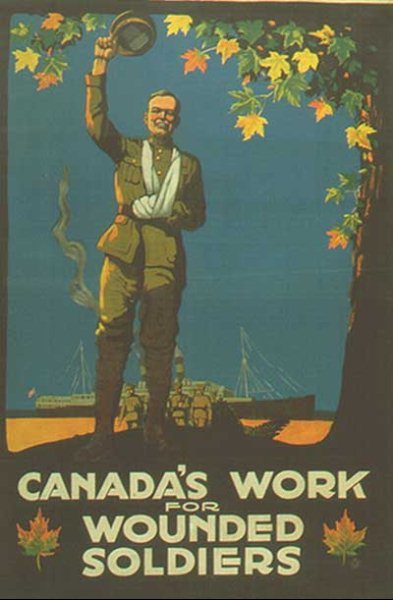 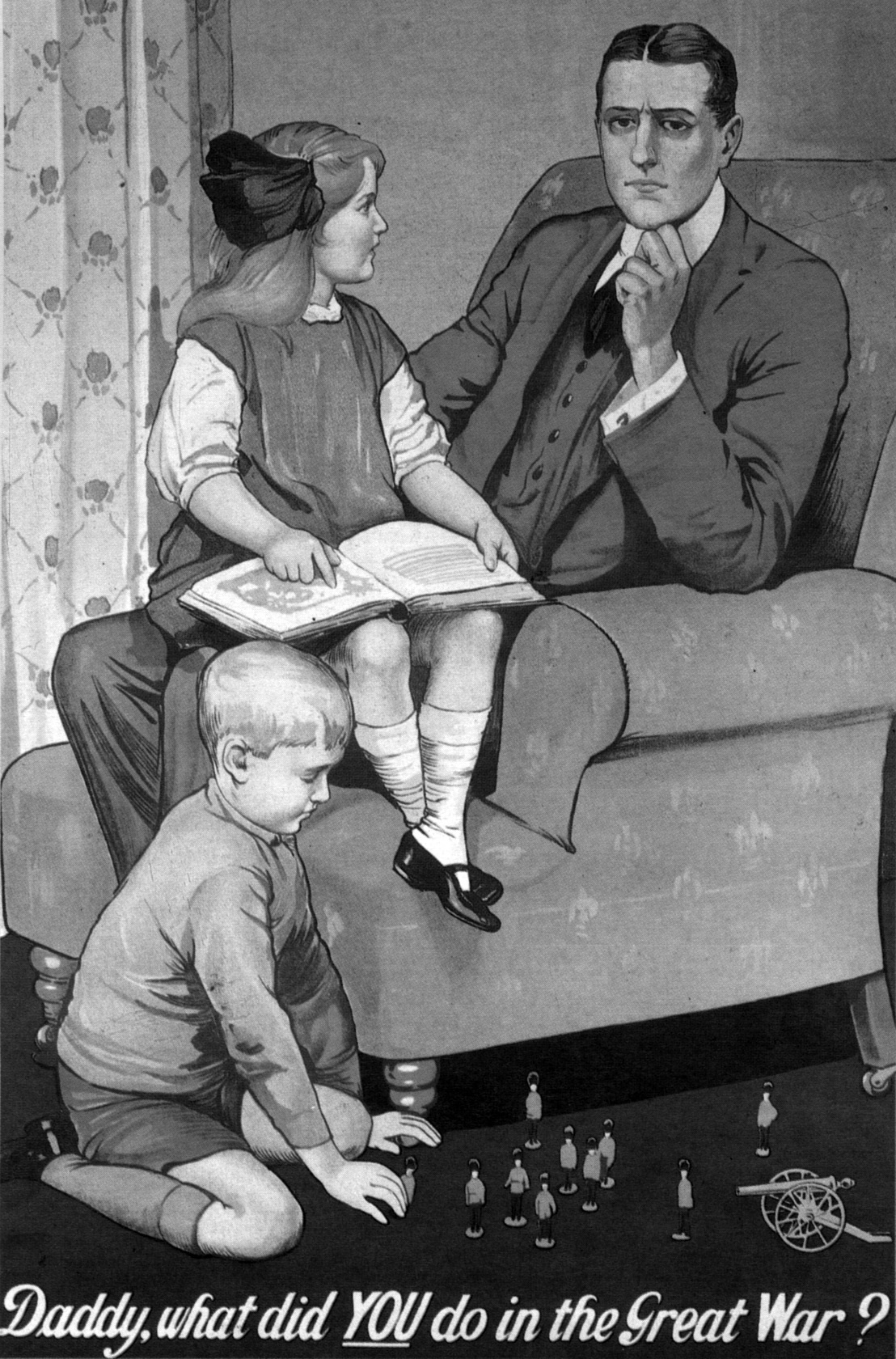 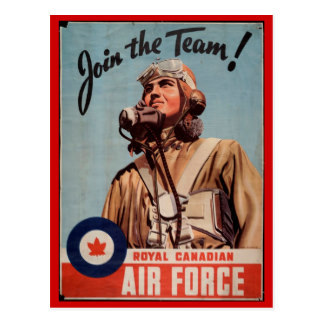 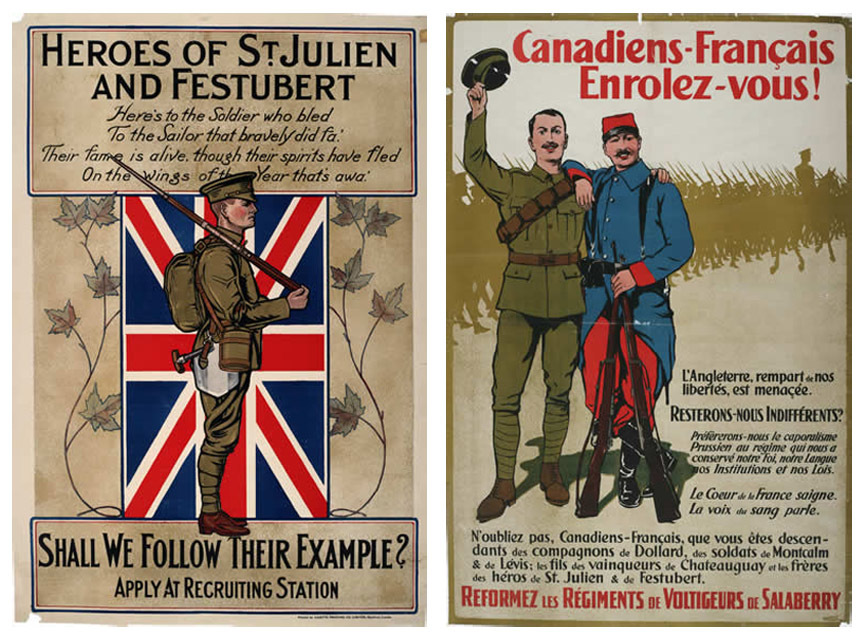 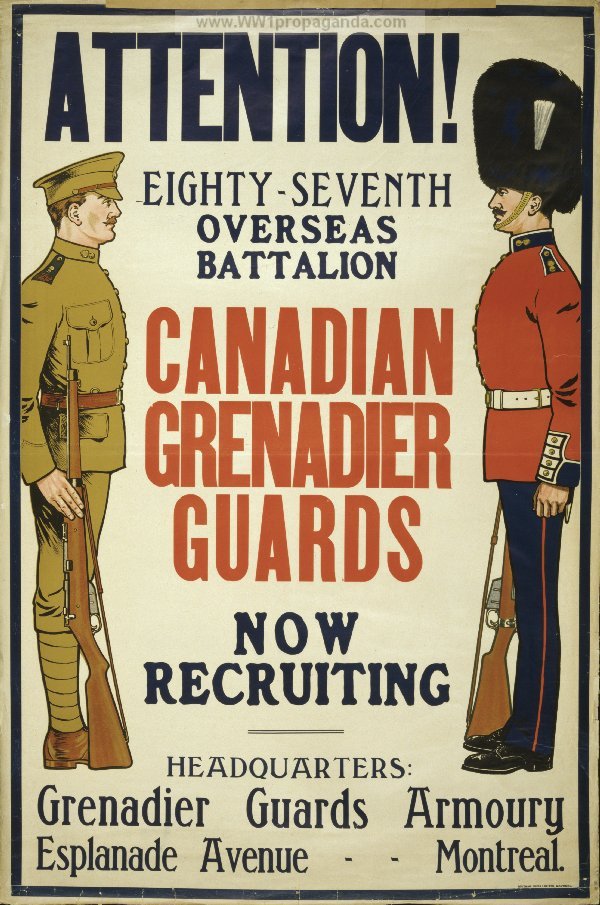 
New technology and science gave way to a new kind of war. With advancements in the machine gun, artillery, and developments in the use of gas weaponry, new strategies of both defense and offense had to be applied. The war became one of attrition in which the men died out long before their ammunition did. 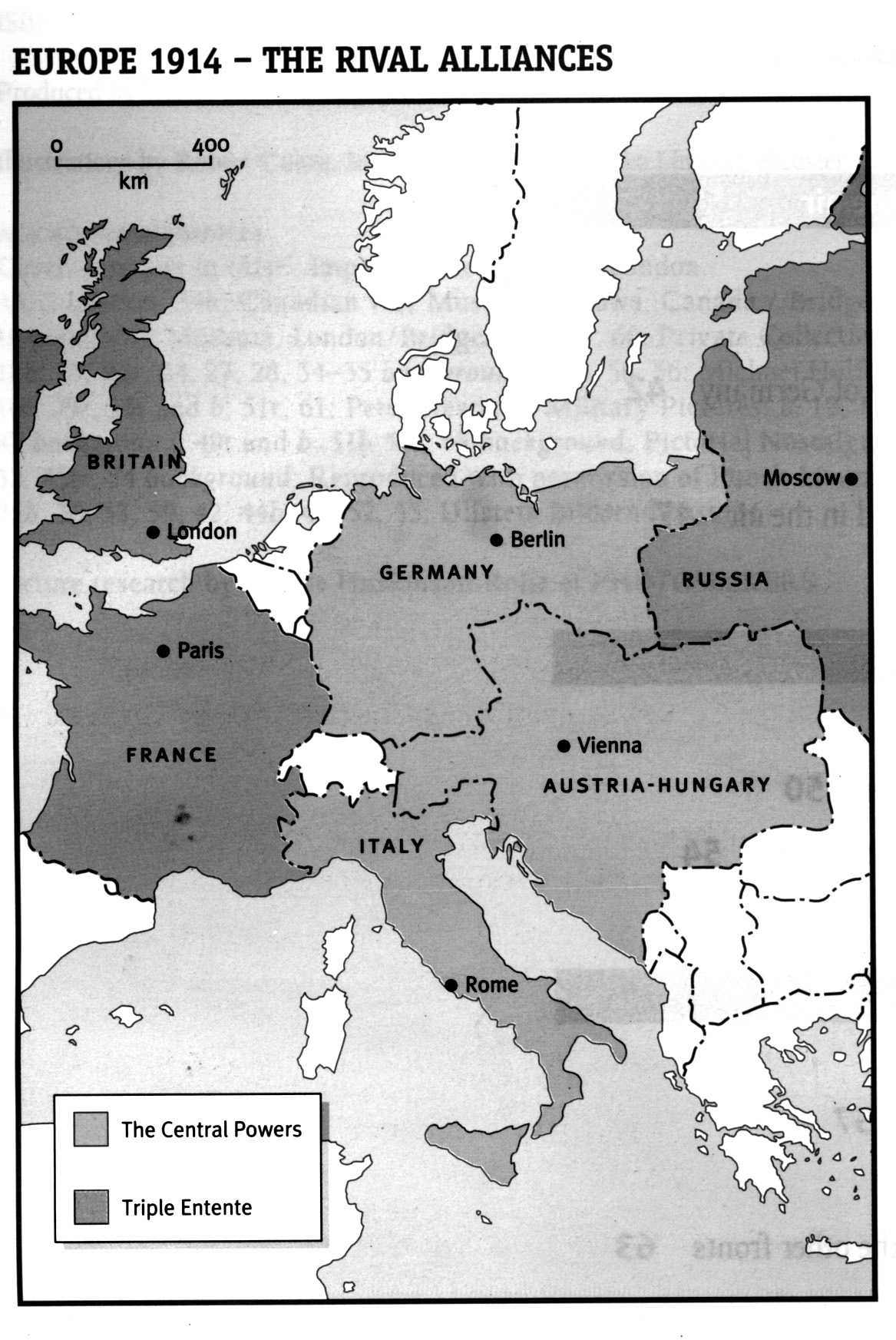 Bayonets were issued to every soldier in World War One. A bayonet is essentially a blade secured to the end of a rifle, used primarily in close combat. The French preferred a needle bayonet, while many Germans used a saw-like bayonet. The English primarily stuck to the standard knife variety.

Machine Guns soon took over the bayonet as the lead weapon in WWI. First invented by Hiram Maxim in 1884, it was the first auto­matic, continuous, portable firing weapon. It could fire between 400-600 rounds of ammuni­tion per minute, equaling the combined power of 100 rifles. It took three to six men to crew the machine which usually was positioned on a tripod. Machine guns were used by both sides in the war and were despised by the vulnerable infantry who could be gunned down in a down­pour of bullets.

Artillery describes the large-caliber mount­ed firearms used in war. Light artillery refers to solid shots of 4-6 pounds, while heavy artil­lery refers to those weighing 8-12 pounds. The Howitzer and mortar were two of the most commonly used heavy artillery weapons. They fired heavy shells on a high trajectory through a fairly short barrel, making them efficient in their purpose. By the end of the war some of these machines could fire shells weighing over 900kg up to 18km. One major concern for these weapons was that they were heavy, and had to be modified in order to be trucked through the mud and shattered ground.

Grenades were originally hollow iron balls filled with gunpowder and ignited by a slow burning match. To be effective they had to be thrown over 100ft. At the start of WWI they used a stick grenade which was more effective but still had a short trajectory, proving danger­ous for the men in the front line trench who were often hit by friendly fire. In 1915, the British invented the Mills Bomb. Once the grenade was in the air, the lever flew up and released the striker, which ignited a four-second time fuse, allowing the thrower to take cover before it exploded. When the grenade went off, the cast-iron casing shattered producing a shower of metal fragments. The Mills Bomb was adapted to be fired from a rifle sending the grenade over 600ft. Over 33 million Mills Bombs were deployed by the British troops alone.

Armored Cars were fortified open-topped vehicles with machine guns or other artillery mounted to them. The most popular Ally car was the Napier produced in 1912. The Armored cars had little use on the tough terrain of the Western Front, but were very successful in Palestine and in Mesopotamia where they were deployed in what had previously been the Cavalry role of outflanking and pursuit.

Tanks did the job of what the armored cars could not. In the United States, the Holt Company built a tractor with caterpillar tracks that was used to move over difficult territory. The machine could successfully cut though barbed wire, and was fitted with revolving machine guns. Built under top secrecy, the tractor was given the code-name “tank” by the British Colonel Swinton. The WWI tank was slow and could not cross over the broad trenches, making it inefficient for this war, however it con­tinued to be redesigned and was an indispensable part of WWII.

Gas attacks discharged from bombs or cylin­ders and carried by the wind, often began in the morning hours when the cold air would main­tain the weapon’s power keeping it low to the ground. The Germans were the first to use gas at the Second Battle of Ypres on April 22, 1915. The French, having no idea what giant cloud of green mist was, fled in fear. Soon gas was being used on both sides. Chlorine gas was very commonly used and would cause asphyxiation and a slow death. Mustard gas also became very popular. Contact with this gas led to the rotting of the body, blisters, blindness, nausea and dete­rioration of the bronchial tubes. To combat the attacks, men used urine soaked cloth as means of neutralizing the chlorine gas. Later gas masks were developed covering the eyes, mouth, and nose with neutralizing chemicals. These masks were bulky, uncomfortable, and did not protect the men from the psychological fear of gas.

Questions for the Classroom:

1. How did the new technology of the war change the way in which soldiers fought and leaders strategize?

2. How did the psychology of war change? What were the effects of trench life, gas, heavy artillery, and the presence of no-man’s- land on the soldiers?

3. Imagine yourself as a soldier in the trenches. Why are you there? Is it duty to your coun try, respect for your family, loyal patriotism, or some other reason? Imagine your environment. What is above, below, and next to you? Write a diary entry describing 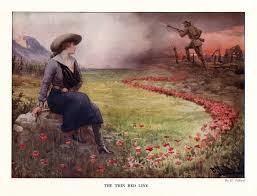 The Thin Red Line by Harold H. Piffard from Canada


The Great War and Modern Memory by Paul Fussell

Canada in Flanders: The official story of the Canadian expeditionary force By Sir Max Aitken

Eye-Deep in Hell: Trench warfare in World War I By John Ellis

Goodbye to All That, (1929) autobiography of Robert Graves

All Quiet on the Western Front (1929), novel written by Erich Maria Remarque

Wings (1927), directed by William A. Wellman tells the story about two fighter pilots, only silent movie to win the Academy Oscar.

All Quiet on the Western Front (1930), movie directed by Lewis Milestone, based on the novel by Erich Maria Remarque (1929)

A Very Long Engagement (2004), movie directed by Jean-Pierre Jeunet, based on the novel by Sebastien Japrisot (1991)