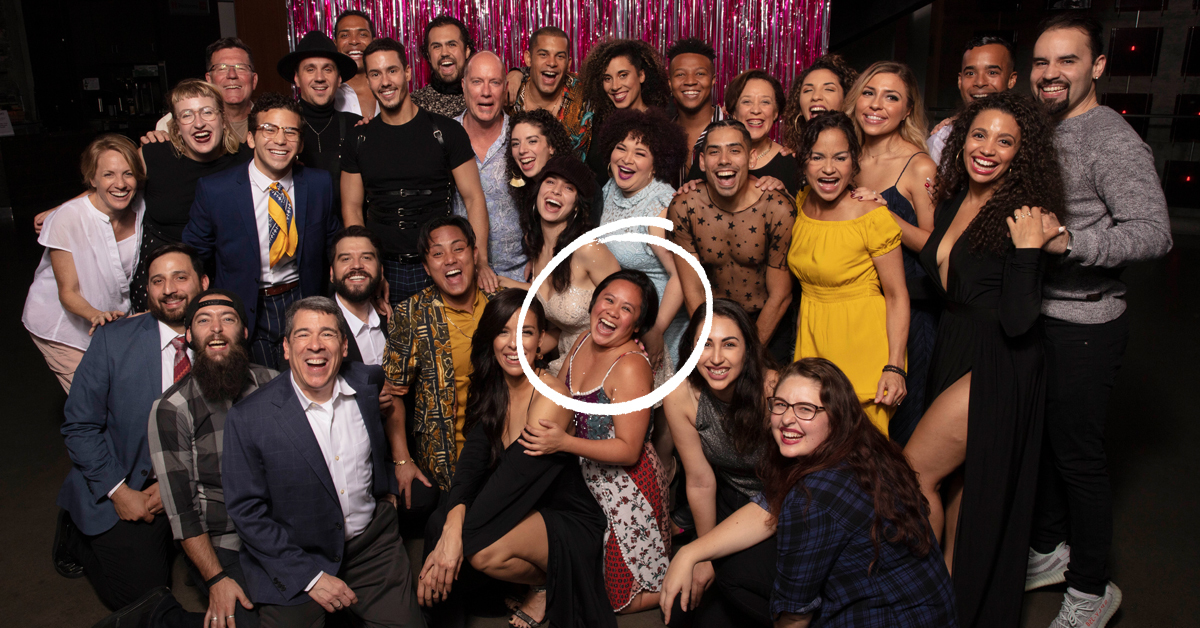 Kristen Mun front and center (like any good stage manager!) wearing a red and white dress and a huge smile. She’s surrounded by other members of the cast and creative team of In the Heights at the opening night reception.

Kristen is a talented stage manager and fight choreographer whose credits this season include stage managing 9 Parts of Desire and School Girls, and assistant stage managing In the Heights.

Thanks to Artslandia for allowing us to share this interview!

For our readers who are less familiar with the behind-the-scenes roles in a stage production, will you share what your work as a stage manager and fight choreographer entails?

As a fight choreographer, it is my job to take a physical moment in a play and bring it to life. I work with the actors and director to craft fights that are true to the story (is it comedic? serious? scary?). It is my job to teach them how to do the fight in a way that is safe and repeatable night after night.

What sparked your interest in this type of work in theater, and what training did you pursue?

When I was in high school I was unfocused and unorganized. I took a theater class in the middle of my junior year and it was a game changer. I was the stage manager of a few one-act plays that took place in the library of the school. Suddenly other people were relying on me to be focused and organized. So in a way, I had to step up or step back. I decided to step up.

In my senior year of high school, I participated as an actor. We did a show that had a fight scene and when my teacher asked for volunteers I raised my hand. The fight choreographer for the show asked me if I was interested in going further in my fight training and I jumped at the opportunity.

I went to college at Southern Oregon University and dove deeper into the role as stage manager, at the same time, I went to fight workshops across the country at every spare opportunity I could get. During the year, I worked and studied as a stage manager and then whenever I got a break (spring break, summer, even some winter breaks) I would train. By the time I graduated from SOU, I was also certified as a teacher in stage combat with Dueling Arts International.

What is the most challenging aspect of your job? The most rewarding?

I love being a stage manager. I have learned so much about the world and myself by stage managing.  I love learning, and when I stage manage I listen and I learn so much. I love being backstage and being a part of the magic. Because I know it’s not magic, it’s hard work. We work so hard all the way up until opening, so that it looks like it is effortless. I think the most challenging part of my job is the hours we have to put in. We work 10 hour days the week before a show opens and that can be exhausting. But most of the time, I get to hang out with the best people so it’s not that bad.

As a fight choreographer sometimes the hardest part is creating the violence. I am not a violent person and violence brings me no joy. But I am a storyteller, so I approach every fight scene with, “what is the story we are trying to tell.” The rewarding part is the people I get to work with and then putting all the pieces together so we can tell the story with truth and honesty.

What’s the biggest challenge you’ve overcome so far, and how has it changed you?

I am pretty short, I’m 4’9”. My height has been a constant challenge all my life. When you are short, people see you differently or not at all, and like a lot of unique kids, I was bullied in school. When I started training in stage combat, I realized I unintentionally put limitations on myself. There were times that I didn’t think I could do things, or I wasn’t strong or big enough, and my training partners would “go easy” on me.

Luckily my teacher Gregory Hoffman saw my potential and pushed my training in a way that has changed my life. Through his training and encouragement, I was able to push myself to do things that I didn’t think I was able to do. He never let my height limit my ability, and he never let me use it as an excuse. He would call me out, “Kristen, you’re small, so you have to move. You will always fight people bigger than you. So learn how to fight big people.” Gregory taught me that I had to do things my way. I saw the world differently, I interacted with the world differently, so I had to stop comparing myself to everyone else and do things my way.

I translated that confidence and strength to my role as stage manager and throughout my life.

My family. My brother and sister are my inspiration. They are hardworking, driven individuals, who are also the kindest, nicest people on the planet. They are my anchor point and my closest friends. They think about the world differently and are not afraid to tell me when I am wrong, or when I should think about something from another perspective. They keep me honest and remind me to be kind.

My mom and dad are my biggest fans, my support system, and a constant inspiration. I think about my parents a lot when I work on a play or show. They have an eagerness to learn and to expand their knowledge, I love that. They have a curiosity and open-mindedness that I try to emulate. Also, like most kids, I want to make my parents proud. Even though they are across an ocean, their support drives me.

Describe for our readers your perfect night out (when social distancing isn’t a concern).

There are so many wonderful things to do in Portland, my perfect night out would have to include a time turner so that I could do everything. My favorites include having a beer and playing board games at Game Knight Lounge, attending any OMSI After Dark event, going to any Sofar concert, and playing video games at Quarterworld.