This play imagines what the witty and vibrant Bennet sisters’ world might be like two years after the end of Pride and Prejudice.

It’s December 22, 1815. Mrs. Elizabeth “Lizzy” Darcy (née Bennet) and her husband, Mr. Fitzwilliam Darcy, are preparing to host a family Christmas gathering. Fans of Jane Austen will remember Lizzy and Darcy from their delightfully contentious courtship in Austen’s novel Pride and Prejudice. That book follows the five Bennet sisters as they navigate the joys and challenges of young women tasked with entering English society and finding a husband.

At the beginning of the play, Lizzy and Darcy are happily married and living at their Pemberley Estate. Eldest sister Jane is still married to her beau from Pride and Prejudice, Charles Bingley, and they are more in love than ever and expecting their first child. Lydia, the youngest, was the most sociable and flirtatious of the Bennet sisters. She defied social norms and ran off with a militia officer named George Wickham, leaving Mr. Darcy no choice but to bribe Wickham into marrying Lydia to save her reputation, effectively deflating the romance of it all. Now, Lydia exerts much energy convincing her sisters that her marriage is a happy one. Kitty, the second youngest sister, is unable to attend the Christmas festivities and does not appear in the play. And then there’s Mary Bennet. Smart but solitary Mary Bennet. The observant but overlooked middle child. The girl everyone sees as boring, spinster-ish, even cynical … and perhaps she is. Or was. Because this Christmas, Mary is coming into her own as a woman, and fate is lying in wait to stoke the fires of her heart …

As Lizzy finishes decorating the house, she and Mr. Darcy jokingly contemplate the ethics of a “new-fangled” English trend imported from an age-old German tradition of cutting down evergreen trees and ornamenting them inside the home for Yule. They also discuss news of the recent death of Darcy’s aunt, Lady Catherine de Bourgh, who had intended that her daughter, Anne, marry Darcy. But then he met Lizzy Bennet and the rest is history. There is further news that while Anne will inherit sufficient monies to ensure she is financially stable, she will not inherit Lady Catherine’s home and estate. The property and all its trappings — including a title of nobility — has been passed to Anne’s cousin, a Mr. Arthur de Bourgh (now Lord de Bourgh), who has had little contact with the family and spends most of his time reading and studying at Oxford. He is a true intellectual, more interested in books than parties, and in modern parlance, we might go so far as to call him, “like, a total geek.” Darcy surprises Lizzy with the news that Arthur will be joining them for Christmas at Pemberley. Unsurprisingly, Lizzy takes an intrigued view of the addition to her table and adopts a “more the merrier” attitude.

Then the gang bursts onto the scene: Jane and her husband Bingley, in a flourish of packages and kisses, followed by Mary, who is already distancing herself from her sisters’ all-too-sociable displays of affection. Lydia was supposed to arrive with her sisters, but has delayed her journey by a day; her husband Wickham is not welcome in Darcy’s home due to old wounds, so he will take a private holiday elsewhere. The sisters discuss Lydia’s letters professing her and Wickham’s passionate love and agree that they are just posturing. Mary pointedly states that it's obvious that “Wickham is her husband in title only and not in heart. The chat turns to Mary’s romantic prospects, and she replies that she is content to become an old maid, since that is how the world sees her anyway. But her sisters can’t accept that and decide to shake Mary out of her skeptical shell and help her find a mate. Mary commiserates with her brother-in-law about her sense of herself as a social misfit and the ways her sisters don’t really understand her.

Then, Lord Arthur arrives. His first interaction is with Mary, and despite some awkwardness, there seems to be an immediate connection between them. But just as they edge toward the line of actual flirtation, boisterous Lydia shows up and effortlessly turns all attention toward herself. The whole clan gathers to welcome Arthur and Lydia, and it is soon apparent to everyone except Mary and Arthur that Mary and Arthur would make an excellent couple. Jane, Lizzy, and their husbands start to sweetly conspire to bring them together. What they don’t understand, at least at first, is that Mary and Arthur are quite capable of managing their own courtship, even if it is rocky and nerdy by other women’s standards.

Unfortunately, Lydia is secretly hurting badly from her own failed marriage, and decides she also wants to pursue Arthur romantically, even if only to have a lark. Through a marvelously farcical sequence involving a handful of miss-delivered letters, Mary and Lydia and Arthur end up in a confusing triangle of flirtation. Just as they get it sorted out, and Mary and Arthur are about to take the risk of admitting they have feelings for each other, Anne de Bourgh shows up with the shocking news that she and Arthur are engaged to be married. Everyone, including Arthur, is caught off guard by this revelation, and all the hopes for a potential partnership between Mary and Arthur are dashed.

It is Christmas Eve morning. Arthur tries to win Mary back, but she has steeled herself against him. Unsure of how to proceed, he consults Mr. Darcy and Mr. Bingley, who encourage him to be his own man and pursue the woman he loves. Arthur is at a loss; he’s never dated or been in love before, and he believes his status as an academic loner has left him ill-equipped to handle matters of the heart. It looks like he’s going to give up. So Darcy and Bingley pledge to intervene secretly on his and Mary’s behalf. Meanwhile, the sisters try to reconcile after Lydia’s divisive performance, but it just leaves Mary more and more vulnerable. Darcy and Bingley recruit Jane, Lizzy, and Lydia to their matchmaking cause, and the group has to convince Arthur not to leave Pemberley. Anne de Bourgh, for her part, treats the family with disdain in her attempt to dominate Arthur.

The situation reaches its boiling point, and much to everyone’s surprise, Arthur and Mary do the difficult, beautiful work of opening themselves up to each other on their own. Their love gives Arthur the strength to refuse Anne’s bidding and the arranged marriage. Anne starts to leave in a huff, opening a path for Mary and Arthur to build a life together, but is stunned when Arthur generously appoints her ward and guardian of her late mother’s estate. Anne is still lonely, but the Bennet clan helps her realize that she is now a free woman, unbound by any arranged marriages or her mother’s rules of courtship. She leaves Pemberley with a renewed sense of her own agency in finding true love. Arthur and Mary commit to their engagement, and all enmity between the sisters is exorcized. In the final moment, Mary Bennet — boring, spinster-ish, brilliant, awkward, perceptive, middle child Mary Bennet — looks out upon the world and her future and smiles, for now she sees only pure, joyous potential. It looks to be a very merry Christmas at Pemberley indeed. 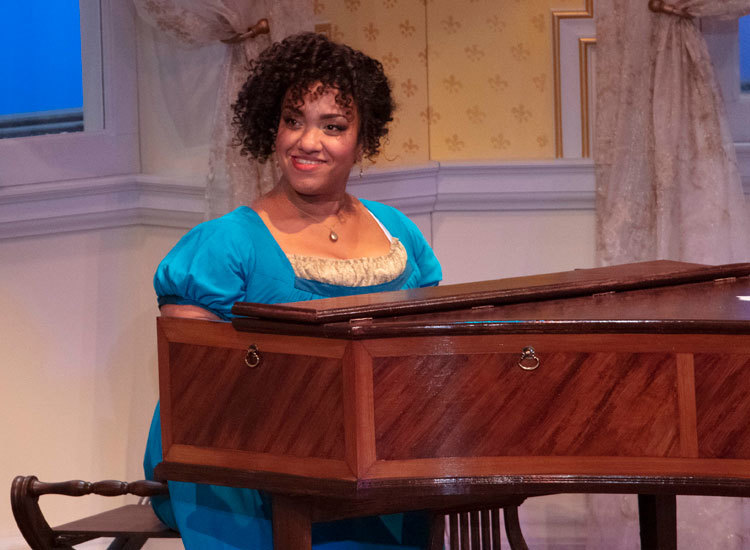 Phil Johnson, sound designer for Miss Bennet: Christmas at Pemberley, discusses the challenge of curating a period-appropriate soundtrack for a play set in 1815, while infusing it with contemporary qualities and capturing the holiday spirit. 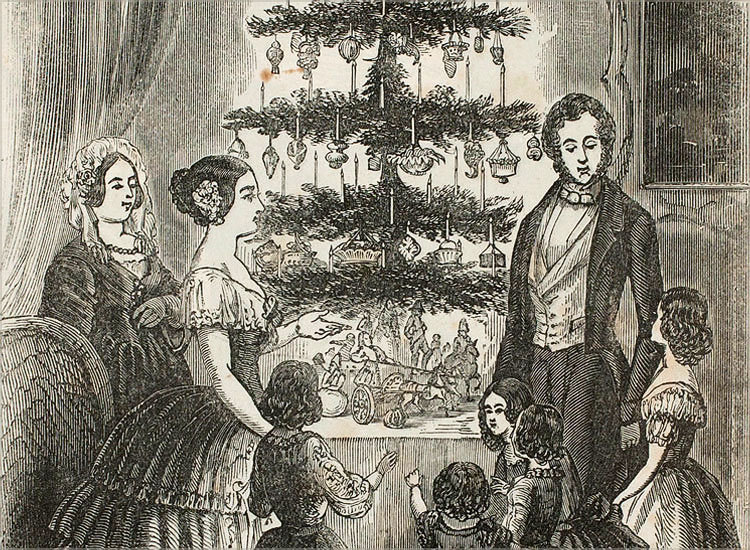 The family Christmas tree is an iconic American cultural tradition, but getting a tree gussied up for the holidays has a long and storied history. Spruce up your knowledge with these fast facts about fashionable firs! 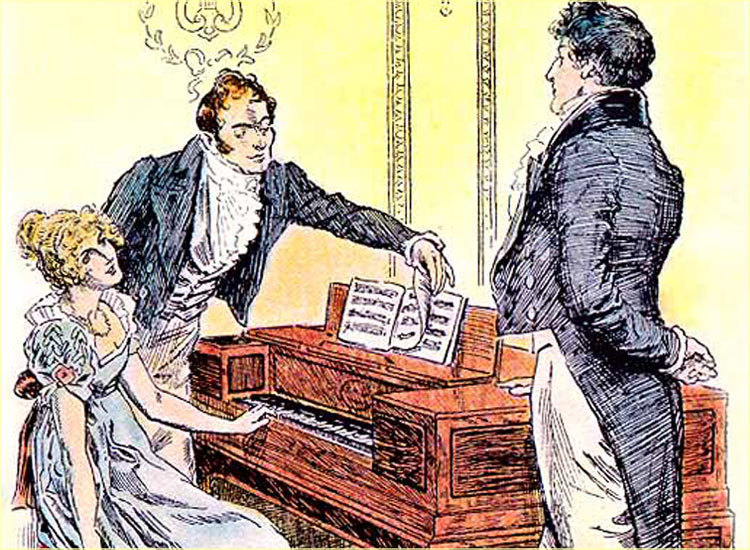