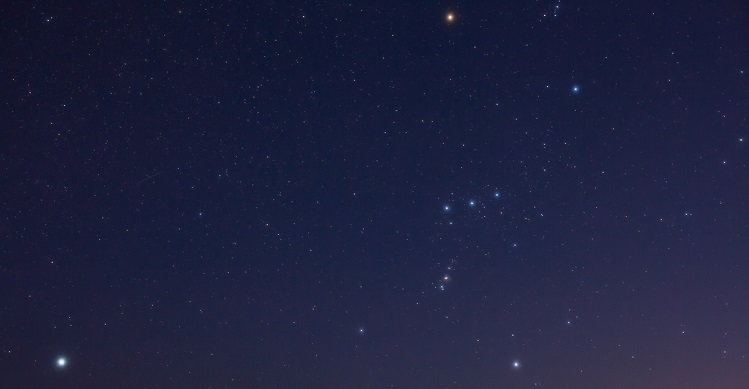 The constellation of Orion the Hunter.

Come, gentle night, come, loving, black-brow’d night,
Give me my Romeo; and, when he shall die,
Take him and cut him out in little stars,
And he will make the face of heaven so fine
That all the world will be in love with night
And pay no worship to the garish sun.
-Shakespeare’s Romeo and Juliet, Act III, Scene 2

So goes the infatuated Juliet’s shimmering, if not a bit macabre, entreaty to the night sky moments before her perfect romance takes a turn toward the tragic. The wish to transform a lover into a constellation is not unique to Shakespeare. Nor is the link Juliet makes in this soliloquy between earthly love and cosmic magnificence. For millennia, storytellers the world over have riffed on the idea that true love might be “written in the stars.” While Romeo and Juliet may arguably hold the title for the most famous “star-cross’d lovers” in the Anglo-European literary canon, theirs is hardly history’s only rocky romance with astral aspirations. In Constellations, Nick Payne’s Marianne and Roland join their ranks. Here are a handful of other celestial paramours to consider while you watch the couple navigate their relationship across the space-time continuum.

The Weaver and the Cowherd
Zhinü, a weaver and daughter of a goddess, fell deeply in love with a young cowherd named Niulang. Their love was forbidden, so they married in secret. When their transgression was discovered, Zhinü’s mother forced her to return to the sky. Niulang underwent a quest to the heavens, but his mother-in-law punished the pair by creating an impassable astral river between them. A flock of magpies took pity on the couple, and once a year the birds unite to form a bridge so that they may spend a single night together. Zhinü embodies the star we call Vega, Niulang became the star we call Altair, and the bridge of the magpies forms part of the Cygnus constellation. Variations of the myth abound East Asian mythological traditions, and each year the Chinese festival of Qixi celebrates the couple’s undying love.

Artemis and Orion
The hero Orion appears in many cultures, from Hindu legend to Greek mythology. There are numerous variations on the story of how he became a constellation, but among the most poignant is the version that tells of the love between Orion, a formidable hunter, and the fierce goddess of the hunt, Artemis. After Artemis confessed her love for Orion to her brother Apollo, he became jealous and tricked her into a shooting contest, wherein she unwittingly guided an arrow through the head of her beloved. The grieving goddess then placed Orion among the stars as a reminder to mortals that while earthly love may be fleeting, its splendor is eternal.

Waupee and the Star Maiden
Shawnee lore tells of Waupee the White Hawk, a hunter who came upon a sisterhood of star maidens. Waupee watched them dance and fell in love with the youngest. Desperate to wed the stellar maiden, Waupee transformed himself into a mouse until he could get close enough to capture her. Once he had, she remained on earth, and they bonded in happy matrimony. But as years passed, she yearned for her star family and left Waupee, with their young son, to return to the heavens. The loss devastated Waupee, so the Star Chief invited the hunter to ascend to the star world. To celebrate their happiness, the family was transformed into majestic white hawks, and it is said they still fly together between the worlds of the earth and sky.