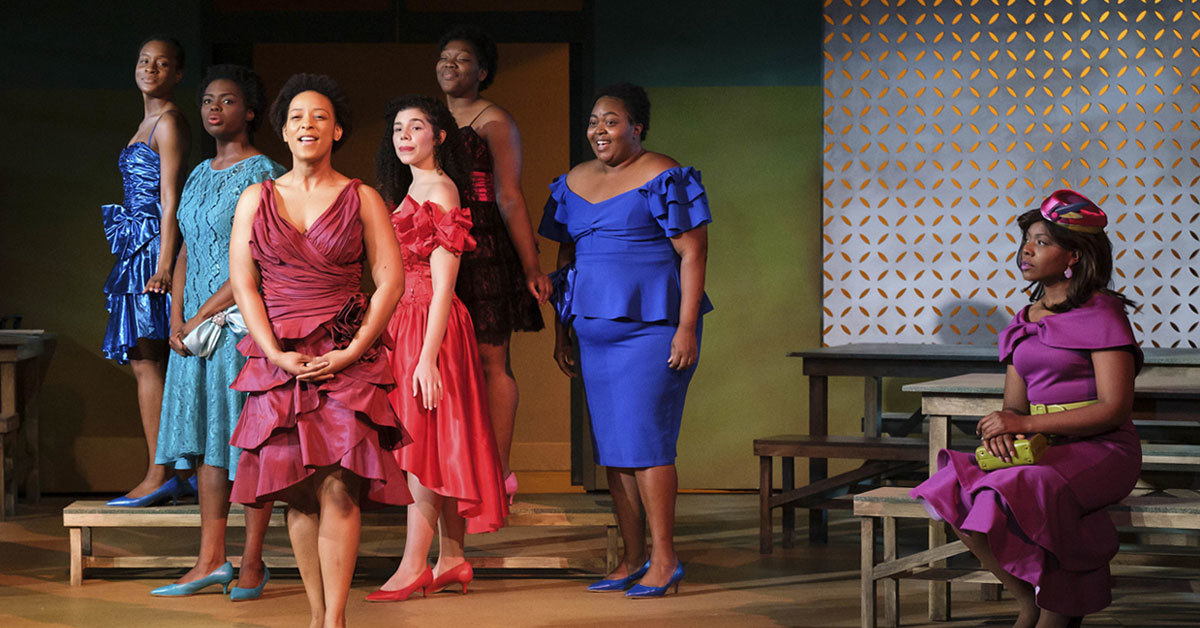 Members of the cast of School Girls; Or, The African Mean Girls Play; photo by Russell J. Young.

Jocelyn Bioh’s play tracks a few weeks in the life of a clique of popular Ghanaian high school girls who focus their energies on competing in a beauty pageant. The play harnesses storytelling conventions of teen comedies like Mean Girls but also subverts them by exploring how our perception of familiar archetypes — the Queen Bee, the New Girl, etc. — can shift when placed in a different cultural context. Bioh’s savvy portrait of youth’s ambition invites a discussion of colorism. By exposing the levels of discrimination the girls face based on where their skin tones fall on the color spectrum, she gives what initially seems like a bubble-gum frolic an incisive political edge.

We asked members of the cast and the director if they would share some thoughts and experiences with colorism in their own lives; a selection of their responses appears below. Note that these views are unique to each of the individuals who offered them. As actor Kayla Kelly put it, these are brief statements about their personal experiences and “by all means should not be a representation of every woman/girl/[non-binary person]’s black experience, but [offered] to shine a light on the many experiences that we go through.”

TAMERA LYN: Colorism is defined as “a form of prejudice or discrimination usually from members of the same race in which people are treated differently based on the social implications from cultural meanings attached to skin color.”

ANDREA VERNAE: Colorism to me is defined as determining someone’s worth and attractiveness based on someone’s skin tone.

LAVA ALAPAI: A perception that the closer to white we can get the better we are.

KAYLA KELLY: I would define it as the divide within. Colorism creates divides in communities and the ways people see beauty in others.

KISHA JARRETT: I feel anyone that is anything other than white has had to deal with the impact of how much melanin they have in their skin.

TONEA LOLIN: In American society, the closest to European features you are the more “beautiful” you are, and the more you are (or seem to be) respected. … This idea is perpetuated to me by other black women who say “I hope my child doesn’t come out dark like you.” Or statements from black men such as “you’re pretty for a darker black girl!”

TREASURE LUNAN: It is the idea that black can only be beautiful when diluted by whiteness. … While colorism is traditionally a term used to identify white-passing or white-proximity privilege within communities of color ... colorism exists because racism exists, and they exist on the same continuum.

KISHA: When I was a kid, I remember being so frustrated that I could never find the crayon that was my skin tone — Burnt Sienna is not the one. I’ve always been told that I was too white to be black and too black to be white.

TONEA: I remember being called an ugly monkey by so many young boys in elementary and middle school. One black boy in 6th grade specifically told me that I was kind of pretty for a darker girl, but he wanted the light-skinned black girl in our class to be his girlfriend. That light-skinned was better.

ANDREA: When I was in middle school I remember telling people that my mother was “red” (a term in the South used to describe [black] people with lighter skin). And she isn’t … but I figured that if I told them my mother was lighter-skinned that they would consider me attractive by association.

KAYLA: Being referred to as the “dark-skin friend” of my friend group. I’ve never been ashamed of my skin. But I always wondered why, when describing me, why was that the first attribute that others thought of me?

LAVA: It wasn’t really an issue growing up in Hawaii. Once I came to the mainland, I quickly figured out that being a lighter-skinned person of color, I was looked at very differently. I was exotic. I was called “approachable.” Hollywood was worse. My agent told me to stay out of the sun so I could be more cast-able. I left Hollywood.

TAMERA: I had the tendency to make an effort to be the exact opposite of whatever “negative” pre-judgment the world has placed on black women. Shrinking myself to fit in a mold and not stand out too much. As I’ve gotten older, that idea of shrinking has been abandoned, and I stand proud in who I am as a black woman, leaving no space to fit in a mold.

KISHA: I struggled with coming to terms with my own power as an intelligent, funny, loud, and charismatic black woman. I have dimmed my own light to make others feel better. I’ve been told that I’m “scary” because I’m quick-witted. I don’t know if it’s getting older or being tired, but I just don’t have it in me to bend to others’ opinions of who I should be.

TONEA: As a teenager, I moved through the world uncomfortable in my skin, wishing I was someone else so people could just see Tonea the human, not Tonea the ugly black girl (as I thought of myself). I am much better [now] at seeing my blackness as a positive part of me and not the only thing that defines me. I define myself as a black woman, but also as the person I am: how I treat others and how I treat myself.

KAYLA: My skin doesn’t define me, but I define my skin.

ANDREA: I learned to move through the world knowing that I have to be the best and the brightest in the room because I will often be in rooms where I’m not expected to be that. But there are times when that’s exhausting … and I’ve learned to remind myself that I deserve to be in whatever space I am in.

TONEA: Anytime I am making art with other folks of color, I especially feel comfortable and joyful to be in the skin I’m in. In those moments I feel represented, proud, and like I am exuding Black Girl Magic!

TREASURE: I experience many moments of authentic and ecstatic joy within my fat black body … last summer I [performed] with Body Home Fat Dance troupe, where there was a ton of focus put into what a fat body could do versus what it could not. It was extremely comforting and liberating … to participate in a playful exploration of the boundlessness of my body.

ANDREA: Last summer, when I was in Maui on the beach feeling the Hawaiian sun on my skin while my skin was popping in a yellow bikini is a moment that brings me immense joy.

TAMERA: I absolutely ADORE being a black woman. I wouldn’t trade being in this skin for anything in the world!