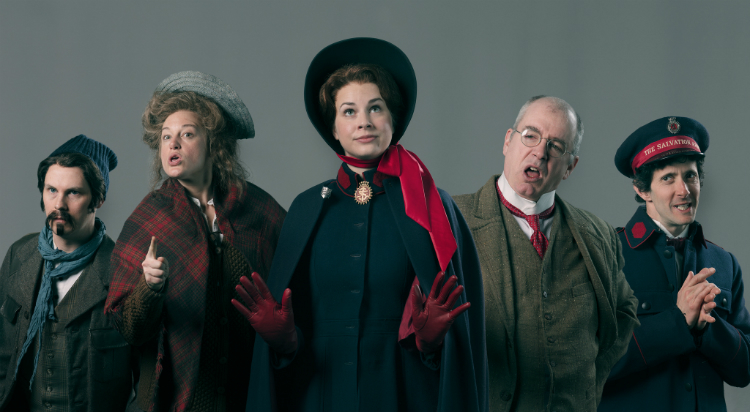 That George Bernard Shaw subtitled Major Barbara “A Discussion in Three Acts” was no accident. Rather, it signals from the start Shaw’s insistence on intellectual rigor in the theater. Many of his most famous plays — among them Mrs. Warren’s Profession, Man and Superman, Pygmalion and Heartbreak House — examine ways in which conventional moral values begin to fray in the face of modern social problems and economic inequity. Shaw deployed his dauntless sense of humor to create what might be termed “tragicomedies of diabolical dialectics.” Major Barbara ranks as one of its prolific author’s most provocative achievements and a shining example of Shaw’s ability to use drama as a forum for debate.

In philosophy, a dialectical argument pits two theories against one another for a three-step deliberation: first comes the introduction of a thesis, which is followed by an opposing antithesis, and ultimately results in a synthesis of the two conflicting perspectives. Major Barbara is likewise structured in three acts. Over the course of the play, rival concepts duke it out on stage through the voices of Shaw’s characters who, as is customary in Shaw’s work, are rarely just themselves. They exist simultaneously as three-dimensional individuals and as allegorical figures, standing in for whole ideologies, fragments of human nature, or even entire political systems. Together they populate a landscape of living, breathing ideas on stage. For example, Andrew Undershaft is not merely Barbara’s estranged father attempting to rebuild their relationship. He also doubles as a strongman mouthpiece for capitalist evangelism in the face of Barbara’s faith-based socialism, triples as the Devil to Barbara’s Archangel, quadruples as an appetite-driven masculine wolf to Barbara’s charitable shepherdess, and even quintuples as the violent agent of technological supremacy putting the screws to Barbara’s nearly pastoral pursuit of sacred spiritual fulfillment.

Dualisms such as this are ubiquitous in Major Barbara, and Shaw uses them to expose hypocrisies inherent to his character's belief systems. Some are overt, like the ongoing battle between Barbara and Undershaft. Others are more nuanced, such as the link Shaw draws between Undershaft’s business selling weapons of war in comparison with the Salvation Army’s military structure and the tainted economic necessities that come along with their own battle for souls. These interlocking conflicts — pitting character against character and belief against belief — climax in a complex knot of moral dissonance. Shaw pushes his play to the edge of obliterating the distinction between right and wrong, but he leaves the task of taking sides to his audience.

Major Barbara was received contentiously by its original 1905 English audience. One reason the play stuck in their collective craw was that it captured how much the world had changed in a very short period of time. In only the few decades before Shaw wrote the play, the Industrial Revolution had completely transformed life in Europe and the United States, due to tremendous advances in mechanical progress and urbanization. The sweeping breakthroughs in technology prompted accompanying social changes: now that droves of people were moving to densely populated cities, individuals of differing economic classes were mixing in new ways. Spurred on by the aftermath of the populist Revolutions of 1848 and bolstered by the writings of Karl Marx, for one, perspectives on the human impact of capitalist principles arrived at the fore of political preoccupation.

Additionally, Charles Darwin’s theories on the evolution of species gained growing acceptance in the scientific community. The implication that the guiding law of nature is competition for survival, rather than God’s will, began to erode the sovereignty of longstanding religious values in favor of an increasingly secular worldview. The final years of the nineteenth century, and the early decades of the twentieth, came to be known as the birth of Modernism, a period often characterized as one of systemic shock to humans living in industrialized nations. Exhilarating, because rapid change tends to have dazzling effects, but challenging, because learning to adapt is not always easy. The period was marked by a rise in social anxiety and surges in European patriotism, leading many artists of the day to depict the era as a time of both exuberant curiosity and demoralizing instability.

Given the historical context and considering, in hindsight, the World Wars soon to come, Shaw’s creation of Andrew Undershaft, a monstrously rich arms dealer who declares that “money and gunpowder are the two things necessary to Salvation,” seems prescient not only for the world of 1905, but for today. Perhaps one of the reasons Major Barbara has retained its reputation for controversy is that it provides no easy answers. Each time characters draw moral lines in the sand, others instantly come along to kick the grains back in their faces — and ours.