George Bernard Shaw (1856-1950), the acclaimed dramatist, critic and social reformer, was born in Dublin where he grew up in an atmosphere of genteel poverty. He attended four schools and was tutored by a clerical uncle, but left his formal schooling behind him at the age of 15. Shaw declared himself a socialist in 1882 and joined the Fabian Society in 1884; soon he distinguished himself as a fluent and effective public speaker and an incisive and irreverent critic of music, art and drama. Shaw’s first play, Widowers’ Houses, was produced privately in 1892 and was followed by The Philanderer and Mrs. Warren’s Profession. More palatable, though still rich with challenges to conventional middle-class values, were his Plays Pleasant (1898) which included Arms and The Man, Candida, The Man of Destiny and You Never Can Tell. In 1897 Shaw attained his first commercial success with the American premiere of The Devil’s Disciple, which enabled him to quit his job as a drama critic and to make his living solely as a playwright. Among his plays presented at the Royal Court Theatre were the premieres of John Bull’s Other Island (1904), Man and Superman (1905), Major Barbara (1905) and The Doctor’s Dilemma (1906). Pygmalion, by far his most popular work, was first performed in 1913. During World War I, Shaw’s anti-war pamphlets and speeches made him very unpopular as a public figure. In Heartbreak House (1920) he exposed the spiritual bankruptcy of the generation responsible for the carnage. Next came Back to Methuselah (1922) and Saint Joan (1923), acclaim for which led to his receiving the Nobel Prize for Literature for 1926. Shaw continued to write plays and essays until his death in 1950 at the age of 94.

Courtesy of the Shaw Festival.

I am, and always have been and shall now always be, a revolutionary writer, because our laws make law impossible; our liberties destroy all freedom; our property is organized robbery; our morality is an impudent hypocrisy; our wisdom is administered by inexperienced or male experienced dupes; our power wielded by cowards and weaklings, and our honor false in all its points.

Shaw’s Description of Undershaft in Act I:

Andrew is, on the surface, a stoutish, easygoing elderly man, with kindly patient manners and an engaging simplicity of character. But he has a watchful, deliberate, waiting, listening face, and formidable reserves of power, both bodily and mental, in his capacious chest and long head. His gentleness is partly that of a strong man who has learnt by experience that his natural grip hurts ordinary people unless he handles them very carefully.

Aerial Battlship Weaponized airships were a futuristic idea in 1906, when Major Barbara is set. The first real-world use of bomber planes was in 1911; they weren’t in heavy use until the latter half of World War I. Likewise, bullet-proof cars, like the one Undershaft drives, were not in widespread circulation until World War II.

Bursting Strain The outward force caused by the explosion that launches a projectile from heavy artillery.

Corker Something shocking that leaves someone speechless, sealed up like a wine bottle with a cork in it.

Diapason A rich burst of sound.

Done in the Eye To have been taken advantage of.

Fitter A factory worker who puts metal parts together to make mechanical devices.

Gabble Speech that is incoherent or unintelligible.

Golden Syrup The West Ham Salvation Army shelter serves treacle, a sweet condiment similar to molasses that is a by-product of the process that refines sugar cane into sugar crystals.

Grand Duke Hand Grenade In 1905, Russian Grand Duke Sergei Alexandrovich was assassinated in Moscow by a member of a militant socialist faction, who threw a handheld nitroglycerin grenade into the duke’s carriage. Grenades were a favorite tool of revolutionaries and political assassins at the time of the play—and the years that followed.

Gun Cotton Highly flammable, gun cotton (nitrocellulose) is made by treating cotton wool with sulphuric acid and nitric acid and was used as an explosive in large cannons, such as those found on battleships.

Jawrin’ Slang for talking at length.

Orspittle-turned-out means turned away from hospitals.

Kites Related to hawks and eagles, kites are scavengers that feed on carrion; a battlefield would be a feast for them.

“And sent to the knackers like an old horse.” A knacker is a type of butcher that specializes in animals not fit for human consumption.

List Slippers Footwear that is worn around loose gunpowder, because the hard strike of a normal shoe’s heel could ignite the powder.

Lyddite An explosive substance developed near the British town of Lydd in 1888 that was used in British armorpiercing artillery shells during the Boer War (1899–1902) and World War I.

Potwalloper A person who was entitled to vote because he had a fireplace large enough to boil a pot of water, as was the rule in certain British boroughs under archaic election laws. The laws were reformed in 1832, but the word stayed in use as an insult for a foolish or uncouth person.

Primrose League The Primrose League, founded in 1883, was an organization dedicated to spreading the Conservative Party’s principles throughout Britain by hosting dinners and other social gatherings.

“A sally from heaven” A sally was a sudden attack in which soldiers rush towards the enemy; also, The Salvation Army is sometimes referred to as Sally or Sally Ann.

“Scrape and catlap” Scrape refers to margarine spread on bread.

Catlap is slang for watered-down milk.

“The money is settled.” A common practice among the wealthy at the time of the play, Undershaft would have settled or fixed a large sum of money on Lady Britomart when they married. Her household has since been supported by the interest that money earned.

Skyblue Watered-down milk, which has a bluish tinge.

“Thirteen four” The fighter Todger Fairmile weighs 13 stone and 4 pounds. As one stone unit is equal to 14 pounds, Fairmile weighs 186 pounds, making him a heavyweight by early-twentieth-century standards.

Tied House A bar that is owned by a brewer or distiller and only sells that manufacturer’s product.

Woolwich Infant A type of cannon built at London’s Woolwich Arsenal in the late 1800s, the ironically named Woolwich Infant weighed upwards of 35 tons and fired a 700-pound cannonball, making it one of the largest cannons of its time.

A Glossary of Shaw's London

Assembly Hall at Mile End Mile End is one mile east of the City — the historic and financial core of London on the north bank of the River Thames — and the starting point of Mile End Road, which runs through the East End. The Great Assembly Hall on Mile End Road in the East End could seat 5,000 people and was designed for religious ceremonies and temperance meetings. It is about four miles from West Ham.

The East End Barbara’s Salvation Army shelter is located in West Ham, a neighborhood in London’s working-class East End, which was chiefly comprised of slum housing and industrial sites.

Just south of West Ham is Canning Town, an extremely poor area that is adjacent to London’s docklands.

Prior to the monetary reforms of 1971, the British currency system was as follows: 1 pound (£) equals 20 shillings; 1 shilling equals 12 pence. Common slang for these denominations include bob (shilling), quid (pound), and sovereign (a onepound coin). Approximately £1 in 1906 is equivalent to £90 in 2013, which is worth about $140.

The money references made in Major Barbara illustrate the extreme disparity between the wealthy and poor characters. Charles Lomax receives £800 a year ($112,000 by today’s standards) from his trust fund; this is about eight times more than Snobby Price could earn with yearround employment at “38 bob a week” (about $14,000 a year today). Likewise, Bill Walker managed to save just £2 to see him through the cold winter ($280 today). The fighter Todger Fairmile is comparatively lucky in that he can sometimes win sizable purses wrestling in music hall variety shows; he recently won £20 ($2,800 today). By contrast, Undershaft writes The Salvation Army a check for £5,000 on a whim equaling $700,000 today. It would take Snobby Price 50 years of uninterrupted employment to earn this amount. When Cusins and Undershaft are negotiating Cusins’s starting salary as Undershaft’s apprentice, Undershaft proposes what today would amount to $140,000 a year. Cusins counters with $350,000, and they settle on $210,000.

Undershaft will pay a professor of Greek, who has no skills that are transferable to the profession of running a munitions plant, 15 times the amount that Price can earn as a laborer. 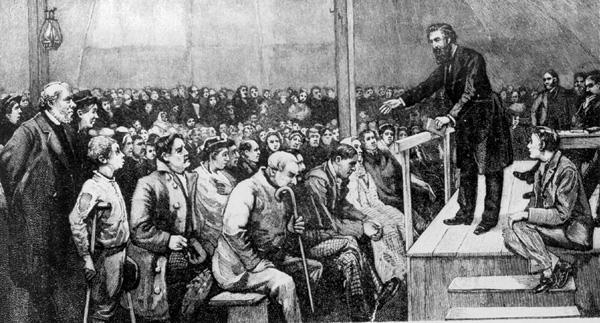 The Salvation Army: A History of Equality

The Salvation Army was originally known as The East London Christian Mission.

William Booth, a Methodist minister, began a new ministry when he felt called by God to serve the destitute in London, England. It is said that East London at that time was over-crowded, very poor and the area was filled with crime and drunkenness. It wasn't uncommon for people to die of starvation.

William and Catherine Booth founded The East London Christian Mission later shortened its name to The Christian Mission. In 1878, it became The Salvation Army and adopted its quasi-military style

Catherine Booth was one of the few females preachers (outside of the Quaker faith) during the 1800s, but she believe it was only a matter of time before it would become commonplace to see women at the pulpit. Her husband agreed. In the Salvation Army's earliest rules and regulations, women were put on equal footing with men:

A live dance performance by visual artist and dancer Latoya Lovely, inspired by the song "Livin' In The Light" by the Portland-based vocalist Onry.

When seven trans individuals are picked to live in a house and get filmed for a new reality TV show, the lines between pretend and real drama become blurred. Inspired by MTV’s 90s hit show The Real World, celebrated theater artist Ty Defoe brings an abundance of heart and humor to this playful piece.

Many writers have had a hard time finding motivation to write this past year. How do you keep going when it feels like you are banging your head against a blank page?

As the lead singer of the popular, neo-funk band Dirty Revival, Sarah Clarke handles genres from RnB, to jazz, and high energy funk.

An agoraphobic political commentator and a boots-on-the-ground activist form an unlikely and complex bond, as they deal with manifestations of the fears that accompany being Black women in America.

This special dance performance will feature choreography that the students from STEPS PDX have learned and created over the last few months.