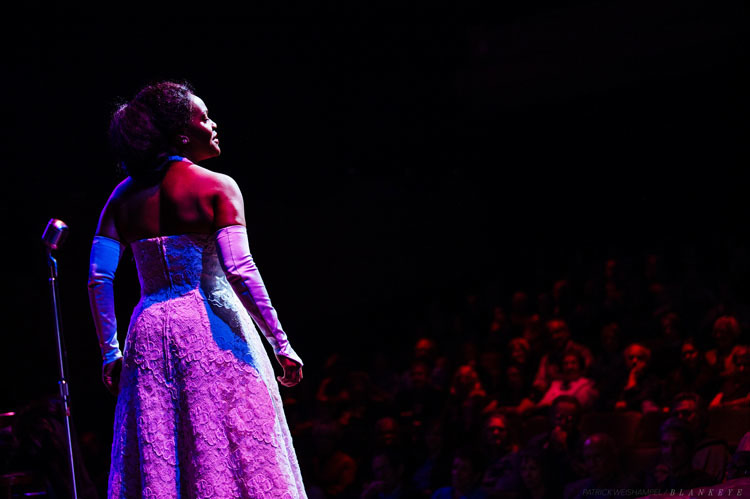 Deidrie Henry as Billie Holiday in "Lady Day at Emerson's Bar and Grill" at The Armory. Photo by Patrick Weishampel/blankeye.tv.

Lanie Robertson knew he wanted to do a play about Billie Holiday’s last concert 10 years before he sat down to write Lady Day at Emerson’s Bar and Grill, a play which garnered rave reviews when it premiered in 1986 and would go on to be performed by theaters across the U.S. and abroad.

Robertson, who has written over 30 plays for regional and Off-Broadway theater, often writes about iconic artists and the societal issues they faced.

Since Lady Day’s premiere, Robertson has spoken with a variety of publications about his intimate portrait of this legendary musician. We curated some of our favorite excerpts here, to give a behind the scenes look at Robertson’s creation of Lady Day.

On his inspiration for writing Lady Day at Emerson’s Bar and Grill:

My first lover described seeing Billie Holiday at a club about four months before her death. There were seven people in the audience. She came in, high as a kite, carrying her little dog, tripped on the microphone wire, sang about 12 songs and stumbled out. I thought, “This is such a potent story.” That an artist of that magnitude whose talent was so evident and is still so recognized, was as an individual so dismissed, was so upsetting; it stayed with me. I kept looking for how to articulate it into a play. The image was very powerful, but static. I held that story for about 10 years, but I didn’t know how to dramatize it until I saw Piaf, by the late Pam Gems. A character was told her sweetheart was killed; she crossed to a microphone and sang. And when that happened, I thought, “If I can find a way for the audience to know what’s in Billie’s mind when she sings a song, then it will be a monologue; a continuation of her thought process.”

On choosing which songs to include:

Billie Holiday never recorded a song the same way. It reflected her mood. The first song [in the show] is “I Wonder Where Our Love Has Gone.” She comes out, high, doesn’t know where she is, and sings: “All I know is I’m in love with you.” She gets applause, says, “Thank you so much, I love it” and she’s off. I knew the stories I wanted to tell, and I knew the order I wanted to tell them in, so I’d think, “Which of these songs would lead to this story?

On the decision to set the play in Philadelphia:

Philadelphia was a very loaded place for Billie. It was there that she was arrested on a drug charge and was sent to prison, forced to go cold turkey. As she says in the play, “Philly’s always been the rat’s ass for me.  When I die, I don’t care if I go to heaven or hell long’s it ain’t in Philly.”

On the importance of research:

I wrote everything out in longhand at first. I plotted the "stories" she would recount and I was clear about their order because I felt the selection of the songs determined (through lyrics or sound) the mood swings necessary for the play. I did much research, listening to her recordings, reading everything I could, and speaking with people who'd known her. Once I'd done that, however, I had to await the "arrival" of the text.

The major problem for me was a failure to find the voice of the character. I'm not an African American, and the "voice" remained mine no matter what I did. After listening for eighteen months to a tape recording I'd made of her songs, I dreamt I was hearing Billie Holiday speaking to me. I also dreamt that I was at my typewriter (remember those?), typing what she said. I awoke enough to realize I was in bed. I ran to my typewriter and began writing . . . somewhere in the middle of the play, but it didn't matter. What mattered was I'd found the voice.

On Billie Holiday’s hope in the face of a difficult life:

She was amazingly optimistic. She was never a downer. Not even in her down songs. She loved music and she loved musicians. There is footage from a CBS-TV Sunday morning show in which she’s singing with Lester Young and other musicians. She is like a fish in water, moving through the music. You can tell from her expression. It’s one of sheer joy.

On his advice to aspiring playwrights:

Know the character well enough to look for the point in his/her life that is the key or can be used as the key to unlock the demons within. We all have them—we all try our best to avoid acknowledging them. In writing a play, those demons must be made manifest both visually and verbally in order for an audience to glimpse their own.