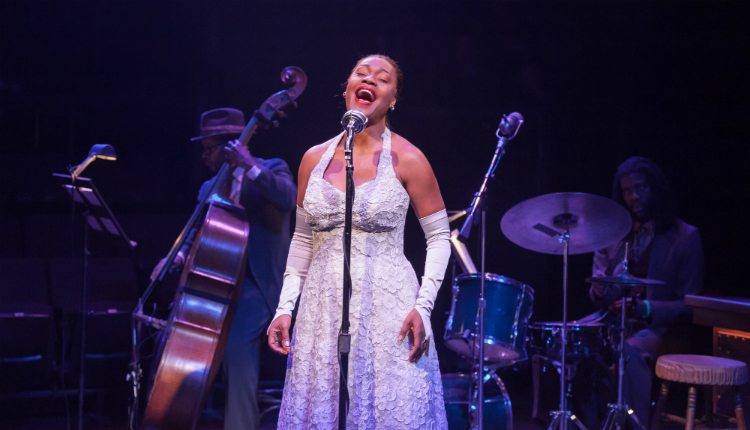 Pictured: Deidrie Henry as Lady Day in Lady Day at Emerson's Bar and Grill at Actors Theatre of Louisville. Photo by Bill Brymer.

ABOUT THE CAST & MUSICIANS

Charles Neal
Drums
Charles Neal is an accomplished musician who performs, composes, produces and engineers music. He has been intense and passionate about music since early childhood and graduated cum laude from Berklee College of Music. Living in Portland for almost two decades, he has worked with many musicians in the Northwest and continues to be an active musician and music advocate. Charles is constantly working on and producing numerous music projects, is passionate about producing, and loves working on both sides of the glass in the recording studio. Collaborating with diverse tastes allows him to continually broaden and perfect his true love of performing and composing music of all kinds. "I'm always on a quest to surround my life with music and live my passion for music. To me, music equals life."


Isabella Byrd
Associate Lighting Designer
Recent: Light Shining in Buckinghamshire at New York Theatre Workshop; Do You Feel Anger?, God Said This, You Across From Me (Humana Festival 2018) and Angels in America (co-design) all at Actors Theatre of Louisville; The Absolute Brightness of Leonard Pelkey at City Theatre (Pittsburgh); The Old Man and The Old Moon by PigPen Theatre Co. at The Old Globe (Associate); The Pirates of Penzance at Amarillo Opera; Everybody at Juilliard School of Drama; and Sundown, Yellow Moon at Ars Nova and WP Theater. Associate designs for Hundred Days and Othello at New York Theatre Workshop; The Hairy Ape at Park Avenue Armory; The Antipodes at Signature Theatre; A Life at Playwrights Horizons; and The Flick at Playwrights Horizons (world premiere), Barrow Street Theatre and National Theatre, London. Additional company affiliations include: Monica Bill Barnes & Company, Lincoln Center, Spoleto Festival USA and Williamstown Theatre Festival. isabellabyrd.design


Paul Toben
Original Lighting Designer
Regional credits include: Lady Day at Emerson’s Bar and Grill, Angels in America Parts 1 and 2, Peter and the Starcatcher, 4000 Miles, and many others at Actors Theatre of Louisville; designs for five seasons of the Humana Festival including Evocation to Visible Appearance, Airness, The Grown-Up and The Roommate; Electra (Court Theatre); The Firebirds Take the Field (Rivendell); NSFW (Roundhouse); Silent Sky, Triangle, Upright Grand (TheatreWorks); Fly by Night, Medea, School for Wives (Dallas Theater Center); The Who and The What (Kansas City Rep); Daddy Long Legs (New York, regional and international premiers); Another Way Home (The Magic Theatre); Caravan Man, Demon Dreams (Williamstown Theatre Festival). Broadway: The Story of my Life. Off-Broadway: The Judy Show (DR2), Saturn Nights (Incubator Arts Project), Electra in a One Piece and The Realm (The Wild Project), The Redheaded Man (Fringe Encores), and many more. paultoben.com

Janine Vanderhoff
Stage Manager
Janine is glad to be back for her third season at The Armory. Previous credits at The Armory include: Kodachrome, A Christmas Memory/Winter Song, Wild and Reckless, Lauren Weedman Doesn't Live Here Anymore, The Santaland Diaries, The Oregon Trail, Little Shop of Horrors, JAW, Great Expectations, Ain’t Misbehavin’ and Our Town. Other Portland credits include Portland Opera’s Sweeney Todd (followspot caller); DC Copeland's Play (stage manager/production manager); Portland Playhouse's How to End Poverty in 90 Minutes and The Other Place (stage manager). Touring stage management credits include: The Graduate (starring Morgan Fairchild), Cats, The Vagina Monologues, Jekyll & Hyde and Show Boat. While in New York, Janine had the opportunity to work on The Lion King on Broadway, as well as with many Off-Broadway and regional companies. Production management credits include: The Daily Show with Jon Stewart for “Democalypse 2012 Republican National Convention” (Tampa, FL); Straz Center (Tampa, FL); The Fox Theatre (Atlanta, GA). Proud NYU graduate and AEA member.


Jordan Affeldt
Production Asssistant
Jordan is a stage manager from the small mountain town of Julian, CA. This is her first season at The Armory as a stage management apprentice, where credits include Fun Home, A Christmas Memory/Winter Song, Kodachrome, Major Barbara and Lady Day at Emerson’s Bar and Grill. Prior to coming to The Armory, she completed internships at Pacific Conservatory Theatre (assistant stage manager for Beauty and the Beast, Lend Me a Tenor, You Can’t Take it With You), Shakespeare Theatre of New Jersey (assistant stage manager for Coriolanus), and ion theatre company (production assistant for Sea of Souls). She received her undergraduate degree from Northern Arizona University, majoring in theater studies and psychology. She spends her free time playing and writing music in the Portland area.