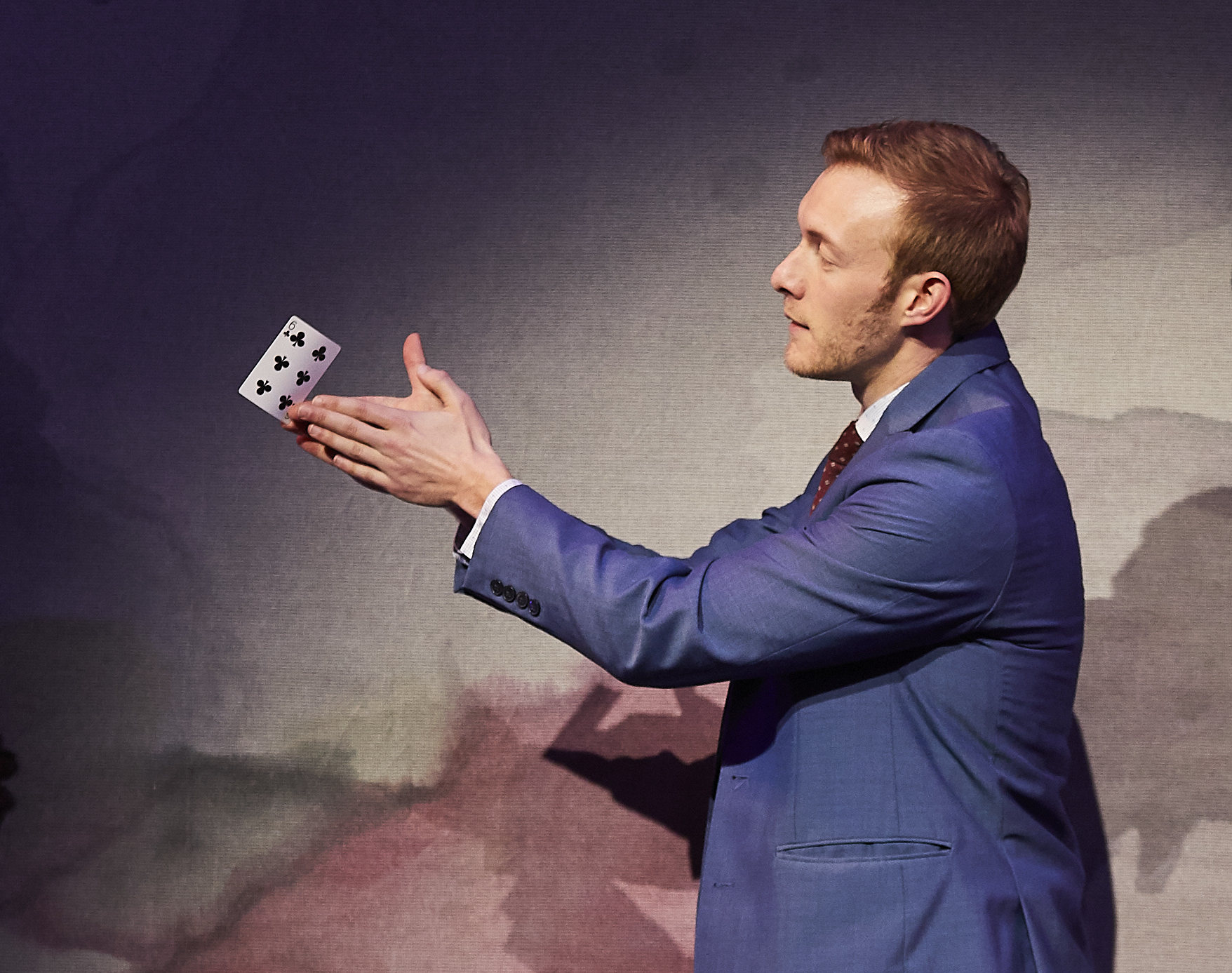 Brett Schneider as The Magician in The Magic Play. Photo by Liz Lauren.

Adam: Where did you grow up?

Andrew: I grew up in Madison, WI — and grew up as a playwright in Chicago and Austin.

I started writing plays in college, about 20 years ago. Right after college, I did a couple of theater internships, including an apprenticeship with acclaimed playwright Philip Kan Gotanda. After Philip was kind enough to read some of my work, he gave me some startling advice: "Stop writing." That's maybe not how he put it (though that's how I remember it) but essentially he felt that I had some talent as a writer, but that I wasn't present in my work. "Where's Andrew?" he kept asking, and suggested I take a break from writing and simply live my life. He told me that if I needed to write, I'd come back to it. I, of course, that this was absurd ('this is my dream!') and so continued to write and intern for another couple years. But then, strangely, I did stop writing for a while. I took an odd job in Student Affairs at a university, and simply didthatfor about three years. But then some things happened in my life that I needed to process, and so I started writing again. That was in 2006, and I haven't stopped writing since. Nor have I gotten that "Where's Andrew?" question ever again.

Theater artists often talk about how benevolent the works is, but if I'm honest, I often write plays for incredibly selfish reasons. I want to explore things that are incredibly personal to me, and I want to offer this up to a room full of strangers, and ideally feel like I'm not alone. I, of course, want the audience to feel less alone too - that's the biggest thrill but it's not the starting point, if I'm honest.

But this is an extraordinary thing about theater. People will come to a building;and listen to what you have to say. And maybe a few will zone out, or check their phones, or unwrap their candy — but most of them will really listen and engage, in an act of generosity that I sometimes find overwhelming. The Magic Play is very much a tribute to that generosity. It's a celebration of theater.

Do you believe in magic?

That's such an interesting question.

I believe that 'magic,' as it is generally presented, is simply adolescent boys (masquerading as grown men) doing card tricks the way they've seen them done 1,000 times. And then doing them with terrible acting, terrible writing, and almost no sense of theatricality. And still I enjoy it.

That's how powerful I find magic. Or more specifically, it's how powerful I find the experience of confronting something impossible. Derek DelGaudio (a magician and performance artist who does not fall into the camp above, who, in my opinion, is an absolute genius) once told me that he does magic because he wants the world to feel a little less certain. I find that so beautiful.

For me, it's less about 'oh there's magic all around us' and more about the reality that a lot of the stuff I tend to feel absolutely certain about is, completely wrong (David Foster Wallace wrote a beautiful speech about this called This Is Water). To me, that's a part of what makes magic miraculous: that I knew that I was looking at an Ace of Spades — I was certain of it — and it turns out I was completely incorrect. That's a powerful experience because it's an honest one. And an important one. I genuinely believe that our world would be in a better place right now if more of us embraced the possibility that we may be completely wrong.

What else are you working on now?

I also write for television and recently sold a series that I'm not allowed to talk about. But writing the first episode and the bible for the series has occupied most of my last year.

What's one work of art that you love right now?

One? That's really difficult to do. Maybe I can share some pieces that I keep returning to, as I rewrite The Magic Play and work on this new television project: The Brothers Size, by McCraney. The Night Alive, by McPherson. Blasted, by Kane. The Last Days of Judas Iscariot, by Guirgis. Hamilton. In & Of Itself, the magic/theater piece by DelGaudio. Moonlight. Eternal Sunshine of the Spotless Mind. Diving Bell & the Butterfly. The TV series Atlanta. The latest albums from Frank Ocean and Bon Iver.

What kind of theater excites you?

Anything that feels deeply emotional and theatrical and ambitious.

I often talk about this theater piece I saw in Austin called september play, devised by Courtney Sale and some of my colleagues in grad school. They performed the piece just once, on the 10th anniversary of 9/11. And when the audience entered the 'theater' (a 1920s gym), they saw that the entire stage was covered by a pastoral mosaic, which had been composed of tens of thousands of tiny pieces of construction paper. The mosaic, itself, was a gorgeous work of art. And the audience, very carefully entering the theater, almost holding their breaths so as not to disturb this mosaic, was its own moment of theater.

But eventually, the audience found their seats, the house lights lowered, and we all watched a time-lapse video of how the mosaic was made. Basically, the entire theater company had spent the previous 48 hours (leading up to the show) painstakingly building the mosaic, one piece at a time. And then ... after the video finished, two guys with leaf blowers walked in and blew the mosaic apart.

It was probably the most gorgeous moment of theater I'd ever seen. (And there's a definite tribute to it in The Magic Play).

And sure, they only had to do the piece once — i.e. they couldn't have executed that moment eight times a week, with two shows on Saturday — but that's sort of the point. So many people spent all that time so that something miraculous could happen for the people gathered in the room. That, to me, is theatrical. And ambitious. And generous and moving and emotional.

Who are or were your theatrical heroes?

What do you want audiences to know about The Magic Play? What do you hope they take with them?

Ideally I want them to know as little as possible. Do you know how hard it is to truly captivate someone's attention for two hours straight? It's virtually impossible (I'm not complaining, by the way — I LOVE this job) but nowhere else do we have this contract with the audience. When I watch a TV show, I'm free to go to the bathroom, check my email, etc. When I go to a concert or a sporting event, I'm free to cheer and drink and jump up and down. When I go to The Magic Play — or almost any play — I just have to sit there and listen.

As a writer, one of the best tools I have to capture and keep your attention is to surprise you. So please, come to the theater knowing as little as possible.

Or, rather, know this:

Know that we've all worked our asses off for nearly five years to make this thing. Know that we're doing our best to give you both an extremely entertaining show and a deeply moving play. Know that this piece is likely not appropriate for your six year-old children.

Know that all of us involved inThe Magic Play appreciate you more than we can ever say — that we are profoundly grateful that you come to the theater — and that you've come to see this show. And that the play itself is a reflection of that gratitude.

Know that, and hopefully nothing else.