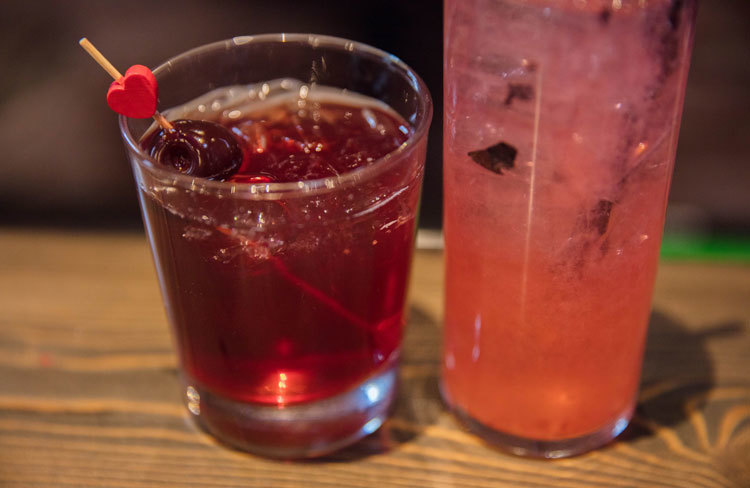 L-R: The Jack of Hearts and the House of Cards now available at The Armory Bar.

Jack of Hearts
I was compelled to create a cocktail in honor of the magician, as this is his story. As you watch the show, you will find why “Jack of Hearts” is a fitting title. I was bit literal with my inspirations for this drink as it was around Valentine’s Day when I was searching for ideas, but I was also trying to avoid an overly sweet drink with syrups and dyes. I decided to use Izze’s Sprakling Pomegranate Soda to give a deep red color and slightly sweet flavor. Seeing lots of chocolate around at the time, I thought of Fee Brother’s Aztec Chocolate Bitters which is something I have been wanting to use. To give the cocktail more richness and deeper color, I decided on Burnside’s Oregon Oaked Bourbon and for a little kick, I added in Addition’s Allspice Bitters. Wanting to avoid corn syrup and dyes, I opted for picks with hearts and cherries with no artificial dye or flavors which also gives it a classier look.

Conjure Me
Before even reading the play, I knew I had to do a magical cocktail! I started researching and I came across the Butterfly Pea Flower — when seeped into liquids it is fairly tasteless, but it will turn some clear liquids a deep blue and other type of liquids purple. I was excited to try it out, but soon realize I was facing a challenge of getting the right combinations to ensure the chemistry worked, not to mention creating a tasty drink. I decided to seep the flower in coconut water instead of just water so the cocktail wouldn’t be watered down. I thought Eastside’s Below Deck Silver Rum and clear Crème de Cocoa would pair well with the coconut water. To add twist to the flavor profile, I threw a little Townshend’s White Rose and lime juice rounds out the drink. A pipette contains one of these ingredients is served with the cocktail. When you squeeze it in and stir, the cocktail will change color. One of my favorite lines in the play is when the diver says to the magician, “Don’t conjure me!” Since the patron is being the magician with this cocktail, I took out the “don’t” so that the cocktail is telling the patron to conjure it!

House of Cards
A house of cards is an important part of the play and I wanted to highlight that in a cocktail. I kept seeing purple basil plant at the store and wanted to find a way to use it. I had this idea to have bits of the purple basil and some red fruit suspended in the drink to reflect the image of the house of cards. I have had a cocktail before with basil, raspberry and vodka and loved it, so I decided to base this cocktail around it. For vodka, I went with my favorite potato vodka, Portland Potato Vodka from Eastside. I shake together the vodka with purple basil simple, fresh raspberries and lime. Served over ice and purple basil flecks, I add some soda water to complete the cocktail.

Chasing a Lady
At the beginning of Act Two, we meet Another Magician - The Magician's father. He does a trick where the “gentlemen” of the audience are chasing a “lady” as in the queen of hearts. I feel this trick summarizes the father’s personality, so this cocktail is to highlight that moment in the play. When you think of drinks for the “ladies” in the bar world, they tend to be overly sweet with a vodka base and I wanted to take a different approach. Thinking about old school magician posters, I thought of Townshend’s Kashmiri Amaro and its bitter cardamom flavor that is a taste of mystery. Looking for other flavors to play with, I noticed Papaya juice at the store which I thought it would go well with the Amaro. For a base liqueur I turned to New Deal's Dry Gin 33 and then added lime juice for balance. To add to ambiance of the concoction, pearl dust is mixed in so when you shine a light to it, it shimmers.