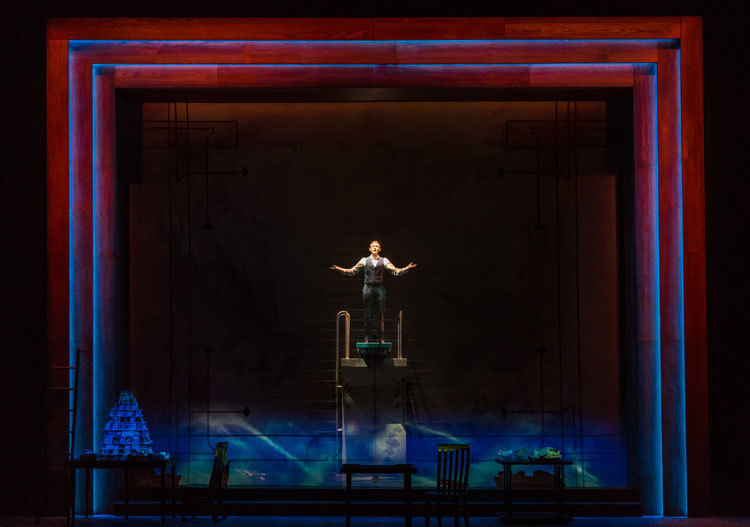 Brett Schneider in The Magic Play, 2018. Photo by Liz Lauren.

Entranced by the Magician's Snare
"In the art of magic, Andrew Hinderaker has found a vivid metaphor for the dynamics of honesty, trust and control that underpin our most important relationships. His immensely entertaining and profound new work, The Magic Play, combines a jaw-dropping performance of classic card tricks with a compelling backstory of tender love. The result is breathtaking." -DC Metro Theater Arts

A Mystical Trip
"You'll be thrilled by the future possibilities of what your eyes behold."-Chicago Tribune

Belief in Love and Magic
"Part magic show, part relationship drama, it examines trust, the conflict between the professional and the personal, and the tension between illusion and reality." -Daily Herald

Magical
“The Magic Play is funny, serious and most definitely, magical. Don’t let it disappear before your eyes." -Northwest Herald

Finesses Dramatic Sleight-of-Hand
"There is the deep magic of Brett Schneider, a pale, slender, intense young actor who is so good he makes his acting all but disappear. He also is a magician/illusion designer so extraordinarily gifted he can fearlessly demonstrate his legerdemain in magnified style." -Chicago Sun Times

See It to Believe It
"While it might be unforgivably clichéd to say, The Magic Play is truly a magical night at the theater." -TheaterMania

A Unique Piece of Theater
"It feels like a bespoke production especially designed around Schneider’s unusual blend of magical and dramatic talents ... It’s rare to witness something like this. My advice is to see it while you have the opportunity." -Leo Weekly

Let Magic Into Your Life
"Always wanting to go the extra mile, in Andrew Hinderaker’s clever The Magic Play, Actors Theatre did not just fill the role of the Magician with a talented actor, but in fact, hired an actor who is also an honest to goodness Magician. Brett Schneider is that talent." -Arts-Louisville.com

"My mind is still spinning from seeing this. Was it real? Was it magic? Does it matter? It was an evening unlike one I've ever had in the theater and that alone is magic. Thank you."

“Amazing acting from the small cast. The main star/magician, played by Brett Schneider, obviously knows his way around a deck of cards and executes his magic effects flawlessly. And his acting skills are top notch! So, go support live magic and see The Magic Play.”