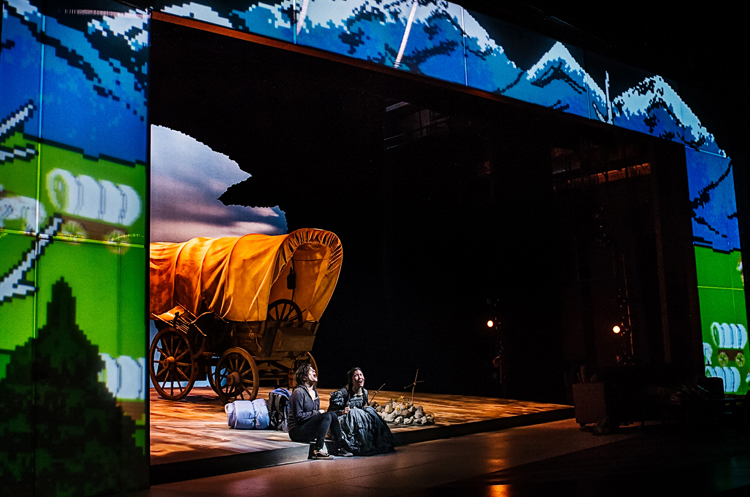 (L-R) Sarah Baskin as Now Jane and Alex Leigh Ramirez as Then Jane in Bekah Brunstetter's The Oregon Trail. Photo by Patrick Weishampel/blankeye.tv.

Brash and Funny
"With a script that's brash and funny, a cast of talented actors with great comedic timing, and deft set design, The Oregon Trail is a fun show, particularly for adults of a certain age group. This is definitely not a show for kids, despite the video game tie-in, but for anyone who grew up playing "Oregon Trail" or came of age in the '90s, The Oregon Trail hits all the marks." -EDGEMedia

Crisply Written Dark Comedy
"Brunstetter's dialogue is flooded with wit and warm '90s nostalgia ... it's a heartening sign that geeks will inherit the earth when a nerdy educational video game from middle school gets such a strapping theatrical production at Portland Center Stage." -The Oregonian

You will be Transported
"For the Nostalgia-Factor alone, "The Oregon Trail" stage-play would be worth the price of admission for students of a certain era ... it was the little things that made the play enjoyable, not only the tidbits of nostalgia, or the self-deprecating jabs at my generation, but also things you'd never have thought of had you not been reminded ... If you want to vividly relive a moment in time, see The Oregon Trail." -The Crippled Critic

A Well-Meshed Cast
"I loved the contrasting stories and especially the wry voice of the Narrator as it gave a deeper substance to the inner self of Jane. Riordan has cast it well and kept the story understandable, even when jumping back and forth through centuries." -Dennis Sparks

Hilarious Effect
"Besides the nod the The Oregon Trail, there are multiple nostalgic nods to the 90s peppered through the play, varying from floppy disks to Teen Spirit to more prominently, music that somehow crosses over between Now Jane and Then Jane to hilarious effect. I loved the staging of the entire production ... A turntable is used wonderfully during a ford the river scene, and a tumbleweed doubles down on conveying the environment around the wagon." -Pechluck's Food Adventures