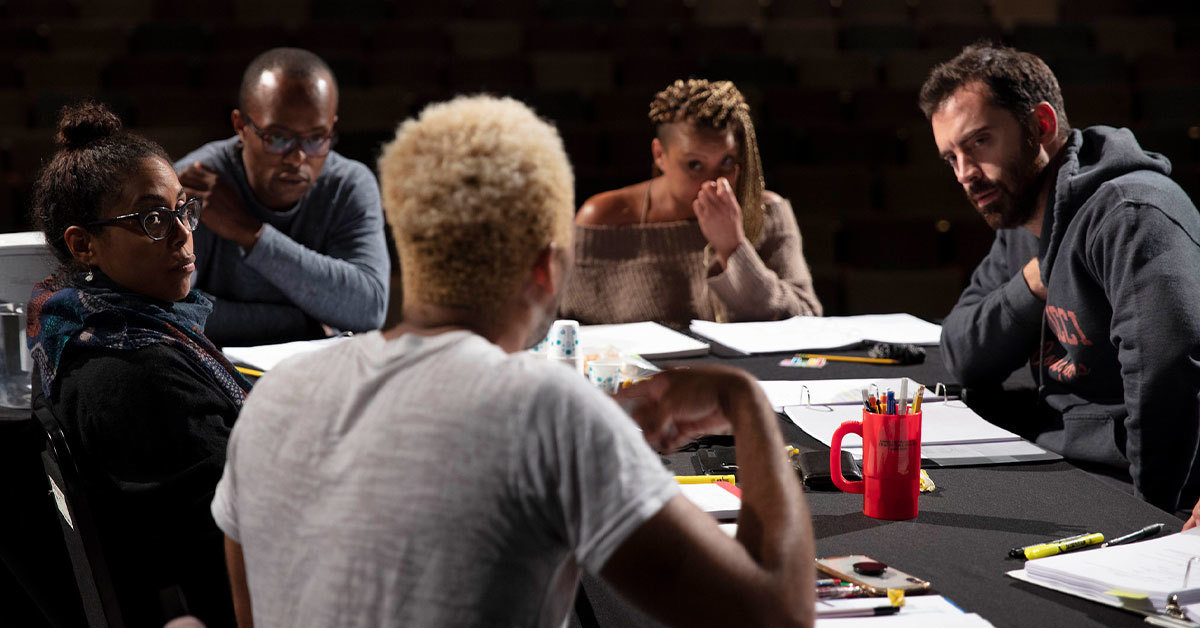 L to R: Chantal DeGroat, Vin Shambry, Chip Miller, Andrea White, and Nick Ferrucci in rehearsal for What Are You Worth? at JAW 2019. Photo by Kate Szrom

In 1999, members of New York Theater Workshop came to Portland to work in concert with Portland Center Stage staff to launch a new play development effort called Just Add Water/West, named after NYTW's own festival back East. Since then, JAW has created a space for 92 playwrights to develop 95 plays. Of these new scripts, 80 have gone on to receive professional productions across the country, with many having their world premieres at PCS.

a hit dog will holler by Inda Craig-Galván
Trans World by Ty Defoe
The Red Beads by Rinne B. Groff (based on The Singer of His Sorrows by Osip Dymov)
Ms. Holmes & Ms. Watson – Apt. 2B by Kate Hamill

What Are You Worth? by Kara Lee Korthron
Howards End adapted by Caroline Hewitt
Otto Frank by Roger Guenveur Smith

Keys of the Kingdom by Penny Penniston
db by Tommy Smith
The Royal Society of Antarctica by Mat Smart
A Life by Adam Bock (Produced at The Armory, 2018)

San Diego by Adam Bock
Bo-Nita by Elizabeth Heffron (Produced at The Armory, 2014)
The Few by Sam Hunter
Broken Stones by Fin Kennedy
The Bachelors by Caroline V. McGraw
The People's Republic of Portland by Lauren Weedman (world premiere, 2013)

Gnit by Will Eno
Necessity by William S Gregory
A Maze by Rob Handel
The North Plan by Jason Wells (world premiere, 2012)

Birds of a Feather by Marc Acito
Middletown by Will Eno
Futura by Jordan Harrison (world premiere, 2011)
Concerning Strange Devices.... by Naomi Iizuka
99 Ways to Fuck a Swan by Kimberly Rosenstock
On the Nature of Dust by Stephanie Timm